Finally I have gotten around to posting my last pictures from Russia, I give you St. Petersburg Day 2.

This post by Scobie reminded me to relate my Esther Dyson story, but first an excerpt from Scobie's post:

Second, Esther is in the top tier of most powerful people in the industry. You can read her resume here. Let's put it this way, she has the ability to make or break products and companies.

So, off to Esther's office we went. She works on the 20th floor of a New York City Office building. Walking in you see tons of evidence of someone who's been important in the industry since when I was in junior high in the 1970s: hundreds of books, a mound of badges from industry conferences, piles of newsletters.

During my recent trip to Russia I was tasked with making sure all the AV requirements were met at a conference; a conference in which Esther Dyson was speaking.

When it became clear that I was going to meet her I was as giddy as a school girl. I kept saying to my co-workers, "I get to meet Esther Dyson" and they would respond:

"Who is Esther Dyson?"

What a buzzkill. If you are interested, here is her bio.

Not letting my co-workers drag me down, I prepared to meet her. Our meeting would consist of me asking her if she had a power point presentation, but still it counts!

Esther was early for her panel, and so I was able to ask her one on one if she had a presentation. She told me she didn't have anything, I thanked her and moved on, thinking to myself, "Her father invented the Dyson Sphere!"

I stood in the back of the room and waited for the rest of the panelists to show up and situate themselves on the dais. Once they were all seated I asked each of them if they had a presentation. The first two people said no, and then I got to Esther. I asked her again to be polite, since she had told me 10 minutes ago that she didn't have a presentation I expected a negative response. She looked me in the eye and said,

"I don't have a power point presentation, but I do have a video tape I would like to play."

The panel was scheduled to begin in less than 3 minutes, and the room was not setup for video projection; no one had told me anyone would have a video. I quickly looked around and said, "OK." Instantly trying to figure out how to project this video. Perhaps I could fashion a VCR out of a few conference badges and some twine.. if only I had twine with me!

Esther saw the panic in my eye and she smiled. I think to myself, "Great, she is enjoying this. When I get home I am returning her book to Barnes and Noble."

She giggled and gleefully said, "I'm just kidding, I don't have anything."

I sighed in relief and chuckled. I was just Punk'd by one of the most influential people in the tech industry.

I related this story to one of the co-workers who had never heard of Esther and he said, "She really is a geek, huh?"

Long awaited, long delayed, I give you St. Petersburg Day 1.

St. Petersburg is the most beautiful city I have ever seen in my life, and I hope my pictures capture some of that. It is like something out of a story book.

Moscow Day 4 is active and ready to be viewed.

There aren't that many pictures since I was working hard all day, but there are a few good ones in there.

Ladies and gentlemen, I give you Moscow Day 3.

My Moscow Day 1 Photo Album is online! Check it out, dudes. There are only a few pictures in it, but there will be many more in the coming days in several more albums.

An Update, and a new Category

Thanks to the marvels of technology I am sitting in Air France's Business Class lounge and posting to Blankbaby wirelessly, from Paris, France. I am on my way back to Philly from St. Petersburg, Russia and I thought I would post a qucik update before I post a few much longer postings.

Just so you can get an idea of what I have been up to for the last few days, take a look at this picture: 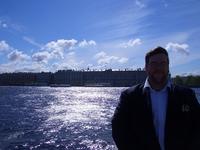 I am standing in front of one of the many canals in St. Petersburg, wwith a few palaces in the background for some flavor.

If you EVER have a chance to go to St. Petersburg you should, but be aware they only have 60 days of sunshine (we were lucky it only rained on our last day there), they have 2 months of summer and 6 months of winter. It is the most beautiful city I have ever seen. And I have lots more pictures to post, but I will do as soon as I get home. I am hoping to edit my pictures on the plane ride to Philly, and then post them from home. Of course, I might just fall asleep in which case it will take me a little longer to get the pictures up.