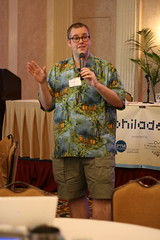 The first time I heard about BlogPhiladelphia I was doubtful. This had nothing to do with the people behind it, rather I am just naturally a stick in the mud (which might explain why I am not an entrepreneur. I would have been the one friend of Henry Ford’s who would have said, ‘Eh. Who wants a mass assembled car?! The people want something hand man, sir!’). Luckily, despite my reservations and thanks to the charms of Alex and Annie I signed on to not only attend but to lead two sessions (give me a roomful of people and a microphone and I’m a happy man. I’m the most extroverted introvert you have ever met, I tells ya!).

As with most things in my life, it turned out to be a very good decision (I should always do the exact opposite of what I think I should do, but that’s another post entirely, and a Seinfeld episode to boot!).

Simply put: BlogPhiladelphia was a kick ass time, and I hope to do it again soon.

Annie, Alex, and the whole Uwishunu and the Philly Tourism Board did a fantastic job putting on this great unconference. The unconference format really highlights the best part of conferences: the conversations you have in the hallways. Instead of making people whisper during panels, the people in the audience are the real experts and they get fools (like me) to facilitate the conversation and try and keep it on point.

The thing that really surprised me was that people wanted to meet me. Me?! Why are these people interested in meeting me? Strikes me as a little odd, but hey I’m an egomaniac so I’ll take what I can get.

Rob Sandie, President of Viddler, has a great post up recapping all the reasons that BlogPhilly rocked (and I am not just saying that because he starts off with me and calls me the funniest person imaginable… though that doesn’t hurt. Thanks, Rob!). Check it out, and I’ll be posting another thing or two about BlogPhiladelphia in the coming days.

Yes, that's a picture of me leading a session. Thanks to Tony for taking it! Check out the BlogPhiladelphia Flickr pool for even more pictures from the event.

Have I mentioned that I hate summer?

100 Frickin degrees today That is just too hot.

Congrats to Marisa for launching her latest project: Stories From Reading Terminal Market. The tagline of the site really sums it up well:

A collection of stories, remembrances, recipes, and photographs from Philadelphia's oldest farm stand

I've subscribed, and I suggest you go the same.

Another reason to shop at Boyds 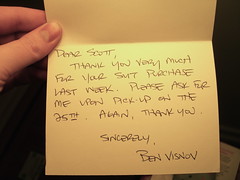 Thank you from Boyds
Originally uploaded by blankbaby.

Or... 'How to tell you overspent on your new suit.'

Look what I found in my mailbox today! That's right, a handwritten note from Ben, the very helpful salesman who sold me my suit at Boyds. That's something you don't get at Men's Warehouse, and it is a very nice touch.

A blogging unconference in Philadelphia? Could it be possible? Why, bless my britches, not only is it possible but it is going to be happening. That's right, the Greater Philadelphia Tourism Marketing Corporation and uwishunu (a blog that they run/sponsor) have just announced BLOGPHILADELPHIA (which I am guessing is supposed to be capitalized). I'm excited, and I wonder if they'll ask me to sit on a panel. I mean, I'm probably one of the few Philadelphia bloggers that is a real live Pro at it (I can think of a few others). Oh, and BLOGPHILADELPHIA folks, if you need help planning this shindig, let me know.

Though, if I were in charge of the event I would have called it Blogadelphia, and not just because I own Blogadelphia.org (though that is a point in the name's favor, however, I would gladly donate the domain).

Watch something BEFORE you post it? That's crazy talk

It would seem The Phillyist has learned an important lesson: watch a video before you post it on a blog:

I will watch any and all news-related videos we post on Phillyist, from start to finish, to prevent such an unfortunate incident from happening again.

Our 14th episode of Fork You is you, and this time we answer some egg related questions submitted via Ask Fork You. If you have a question, please ask us and we might answer it!

Posted at 12:15 AM in Blankbaby TV, Food and Drink, Philadelphia, Weblogs | Permalink

Quick Fork 6: Booze in your tort

I just realized I hadn't linked to our latest episode of Fork You here on Blankbaby! Watch as Marisa makes a chocolate flourless tort (and I even get to eat a crumb!).

We also are in the midst of reworking the Fork You website, so check it out and let us know what you think.

Plus, if you have any questions you would like answered on Fork You (about food, the show, or the hosts) just send it to us via the 'Ask Fork You' feature on the blog.

At the blogger meetup I made the bold statement that the only newspaper I read is the New York Times. That didn't sit too well with the dude from Philly.com, but what can you do? I don't really care about the Eagles or Philly politics... so why should I read the Inquirer again (besides when I am in the paper)?

Anywho, after I made that statement I slandered the Times Select, which is the premium (read: you gots to pay to get to) content on the NYTimes.com. That's when Tamara said, “you dumb nerfherder (I'm paraphrasing), since you work at a University you can get the Times Select for free!”

Sure enough, you can! Just gohere and enter an email from an academic institution and you're all set, if is even smart enough to apply to your NY Time username.

You may recall that I idly asked the universe for DiBruno Brothers to contact me, since I like 'em lots and I co-host a silly little cooking podcast (which is highly entertaining, if I do say so myself). Well, sometimes putting that kind of thing out there pays off.

Marisa already posted about this, but for a limited time, until March 22nd to be exact, readers of Blankbaby, and viewers of Fork You!, can get 15% off all orders at DiBruno.com. Just enter the code BB15 when you're checking out and BAM, you save 15%. If I were you I would check out the six Irish cheeses they are showcasing at the moment. The cheddar with Irish Whiskey intrigues me. Oh, and here are a few more things to keep in mind should you order from DiBruno.com this month:


Thanks to our friends at DiBrunos!

HEY! YOU! Don't forget that the Philly Blogger's Meetup is this Saturday. I'll be there in all my glory (clothed glory, that is), and I hope to see you there as well!

It is true that I have a boring old office job (though judging from last week my job isn't that boring), however, I also have lots of other projects stewing. I really should bit the bullet and cancel my cable so I can better focus my creative energies after work, but that is a different post entirely.

The internet has enabled a whole new category of professionals working out of their homes to spring up, and Philadelphia has its fair share of these folks. Sometimes it is tough to get stuff done at home. You have no one to bounce ideas off of, and you are surrounded by lots of cool stuff (I mean, you are surrounded by all your stuff, so I should hope you think it is cool). That's where the idea of coworking comes in.

Coworking is where you kind of buy into a space with some other folks and use it as a communal office. Such an effort is under way here in Philly and it is cleverly called Independents Hall. Three cheers for Independents Hall! I might even sign up for some space, depending on how much it costs and such.

One benefit of the cold

So it is pretty chilly here in Philly today (Ha! That rhymed). I like the cold, so this doesn't bother me, but many others are not as thrilled by it. The cold did help me out today though.

I stashed a Diet Cherry Vanilla Dr. Pepper in my bag before I headed out to work. Since I don't drink coffee it is my little pick me up in the morning. When I got to work, the can was nice and chilly.

Fork You Quick Fork 5: To Granola's house we go

I have been a little lax in posting about new episodes of Fork You, but if you want to learn how to make some good granola, why not check out the latest episode? I'm hardly in it! Marisa gets most of the screen time, and she is much nicer to look at than I am.

DiBruno Bros. has a blog?!

From Frank, one of my favoritest Philly bloggers, comes word that DiBruno Bros. has a blog. What the heck?!

This is very good news to me for several reasons:

DiBrunos, are you reading? Email me!

And they say all the good domain names are taken

Whatever could this be?

Why must I be beardless

It was not such a great idea to shave off the old beard last night.

What the heck was I thinking? Now my face is going to freeze and fall off... which might be an improvement. ;)

Quick Fork 4: You don't knead it, you want it

I completely forgot to blog about our 4th Quick Fork. This marks the 8 episode of Fork You all told, and we are just getting started folks.

I embedded the episode above in case you want to watch it here, but if you head over to Fork You you can download the QuickTime version (if that floats your boat).

If you're in Philadelphia (and the surrounding area) and you blog (or you just want to meet me) then you had best head over to the January Philadelphia Bloggers' Meetup this Saturday.

It'll be a hoot. Tony is going to be there, and you won't want to make him sad by not showing up, would you?

Dan just told me that Fogo de Chao has a location in Center City (13th and Spruce to be exact). I'm soooo going. I wonder if I can find some people to go this weekend.

Who can say no to $45 and all the delicious meat you can eat?

I just might participate in this Scribble Slam!, but I am fairly certain that I am going to go at the very least. Anyone with me?!

Update: I just realized that I'll be in SF when this is happening, so I can't go. :(