The other doughnut you have to have while in Portland is from Voodoo Doughnuts. While Blue Star focuses on simplicity, quality, and unique flavor profiles Voodoo answers the question, “How much Capt'n Crunch can you get on a doughnut?”

My go to, pictured above, is the Maple Bacon Bar. As I said to Marisa: the Blue Star is better but I like the Voodoo doughnut more. It just tastes like what I want a doughnut to taste like… and I feel like Blue Star is just a touch pretentious.

Posted at 03:12 AM in Blankbaby Approved, Eating, Food and Drink, Travel | Permalink | Comments (0)

I knew there was a problem when I had to limit myself to wearing 7 out of 71 of my Hawaiian shirts.

Ok, don't get hung up on the fact that I have 71 Hawaiian shirts. That's not what this post is about.

I'm blessed, or cursed, with a very good self image. The upside? When I look in the mirror I think to myself, “My, what a handsome young man!” That's great! Everyone should like the way they look, if you ask me.

The down side? The fact that I had gained back lots of the weight I had lost without noticing.

Sure, my pants were snug. But there's an easy solution to that: new pants! And during the winter I wear sweaters which are very forgiving to an expanding belly.

Of course, I knew something was up when several of my Hawaiian shirts didn't fit. Even some of the “fat” shirts I have on reserve (for you skinny people out there those are the shirts I know are a little big, so I can always be certain they'll fit even if other shirts seem to have… shrunk) didn't fit. No bueno.

I've been down this road before, and I've even lost over 100 pounds! When I finally hopped on the scale I found out that I had gained back 70 of those pounds (over the course of several years, but still!). I did find some solace in the fact that I hadn't gained it all back; cold comfort.

Clearly, I needed to do something. But what? Previously I cut carbs out of my diet completely and had seen some great results. The problem with this is that I would stop eating carbs for several weeks and then black out only to awaken surrounded by the crumby remains of several cakes, empty husks of bread, and chip bags drifting down our hallway like tumbleweeds.

What I'm saying is the carb free lifestyle isn't sustainable for me.

But then I cracked the weight lose secret, and I'm going to share it with you right now. Are you sitting down, people, because this is big! Roswell aliens big. Jimmy Hoffa's corpse big!

The best way to shed the extra pounds? Eating sensibly and moving more!

I've known forever that I should eat sensible portions and exercise. But if I could do that I wouldn't NEED to do that, if you catch my drift.

At the tender age of 40 I've come to the conclusion that I have no idea how to eat like a normal person. When left to my own devices I make the worst food choices, though to my credit I also make those choices a lot resulting in consuming a staggering amount of calories.

That leaves me with a problem: I know the solution to my weight problem but I'm seemingly incapable of doing it. What is a fat guy to do?

I found the answer, as one does to so many of life's problems, in Oprah; praised be her name.

One night Marisa and I were watching The Late Show with Stephen Colbert and Oprah was a guest. She was on to talk about being Oprah, of course, but also to chat up her new cookbook. Now, you can't just write a cookbook these days (says the guy who is married to a cookbook author), you need a hook. Even Oprah, praised be her name, needs a hook! And this cookbook featured recipes, as cookbooks so often do, but each of the recipes included their Weight Watchers Smart Point values.

Turns out, as the kids say, that Oprah recently-ish bought part of that venerable weight loss institution Weight Watchers. And her cookbook was like a Trojan Horse to seduce unsuspecting guys named Scott into signing up for Weight Watchers.

Reader, I bought the book. I signed up for Weight Watchers. I weighed my food. I tracked my points. I went to the gym. I've lost 50 pounds in 5 months. 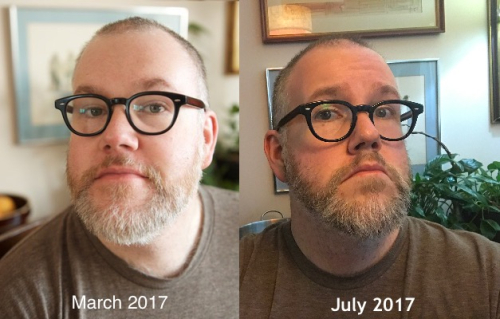 Which means that I've managed to track my food every day for the last 5 months (I would say religiously but I'm an atheist). Warning, I'm about to sound like a Weight Watchers commercial but they haven't paid me a cent (Oprah? Feel free to send me some money. Or one of your favorite things.): it hasn't felt like I've been on a diet. But I've totally been on a diet. 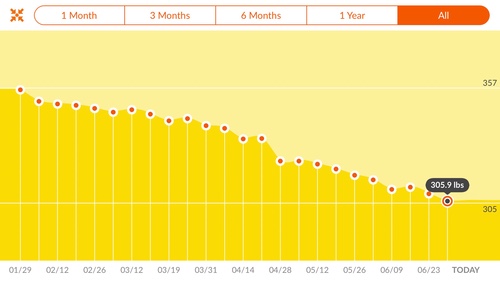 What does it feel like? It sort of feels like I'm learning how to eat like a responsible adult. This isn't fun, I'll grant you, but it hasn't been horrible either.

Now, if you're not familiar with Weight Watchers let me give you the basics. You're assigned a number of Smart Points each day based on your height, weight, and what your goal is (losing weight/maintaining). Various foodstuffs are assigned point values based on a formula that takes into account calories, protein, and the like. You are allowed to eat as much food as you have points for, but once you're out of points you stop eating.

Still hunger? Good news! Vegetables and fruits are 0 points. Eat all you want!

You can sign up for a membership that includes in person meetings, but I don't like people so I opted for the online only membership. This gives you access to the Weight Watchers app which features a barcode scanner. Here's how that works: Pick up a bag of Oreos, scan it to find out how many points are in a serving, figure that isn't too bad since a serving of Oreos is clearly “the whole package,” double check the serving size, question everything anyone has ever told you, put the Oreos package down, and eat a banana.

The app is great because not only does it include a huge database of scannable food, but you can also use a point calculator to find out how many points things that aren't listed have (I've calculated how many points my favorite Sweetgreen salad is [16] and how many points my formally favorite Wawa hoagie has [so, so many points, you guys.]). Plus you can input recipes and it spits out how many points are in each serving (based on the number of servings the recipe makes). This has made Marisa happy since my previous diets of no carbs, dairy, or legumes would make cooking for me more challenging than it usually is.

A Brief Review of the Weight Watchers iOS app

Overall, the app does what it says on the tin. It allows you to easily look up and track your points, enter your weight, and it'll even sync with a FitBit or Apple Health to give you Fit Points (you get points for activities that you can use to supplement your daily points. I have yet to use any! But I accrue them like a mofo).

There are, however, a few areas for improvement:

That's the eating part, which lots of people tell me is the most important part, but what about the exercising (autocorrect, knowing me it would seem, kept changing exercising to “excess icing.” Thanks, iPad, you're a jerk.)?

For awhile I was running like a madman, but I've decided that I like my joints so I should probably do something else in the gym. I cast my mind back several years to when I lost these 100 pounds the first time around and recalled that most magical of exercise equipment: the elliptical. Have you ever wanted to kind of run while hovering a few inches off the ground and simultaneously staying in one place? The elliptical is for you!

I do an hour on the elliptical in two week cycles. The first week I go Monday, Wednesday, Thursday, Saturday, and Sunday. The second week's sequence is Tuesday, Thursday, Saturday, and Sunday. Having a schedule is super important because I know I have to go to the gym. And I can watch a nice BBC show as I workout (tonight I'll be watching the last episode of Series 3 of The Doctor Blake Mysteries, but I'll write another post about all the shows I've watched at the gym covered in sweat and grunting).

All of this work is paying off, but the sad irony is that while I've lost 50 pounds and I feel good about it I still need to get rid of at least about 50 more. If I stop and think about that it makes me want to eat a chocolate chip muffin (31 points) in a dark room, so I don't think about it.

However, when I have those chocolate chip muffin thoughts I remember the deal I made with myself: I'm going to use Weight Watchers for a year and see how I feel/how I did. My weight along the way should be trending downward, but the goal is still 7 months away.

This leads to an obvious question: what's my goal? Well, it would be nice to lose 100 pounds total so why not make that my goal?

All 71 of my Hawaiian shirts fit now. 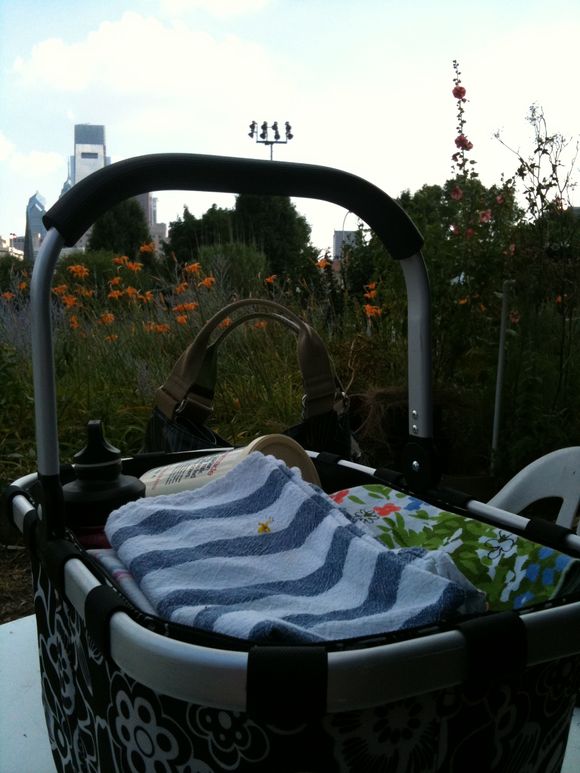 You may recall that before I got married I realized that I needed to get back on the bandwagon and shed some weight. The good news is that I did, in fact, lose some weight (enough to look good in my wedding photos) but the bad news is that we had lots of great food during the honeymoon.

That, in and of itself, wouldn't have been a problem if I had gone back to the gym after returning home. I didn't. I also didn't stop eating like a mad man, and now I've gained all the weight I lost before the wedding back (and then some!).

What is a fat guy to do? Why, turn to a webapp that a smart Philly area developer just launched called Lose It or Lose It. The idea is simple: you decide on a goal (mine is to lose 30 pounds in 10 weeks) and the app lets you decide how much money you're willing to lose should you not meet that goal ($200 in my case). You weigh in every week, and if you don't hit your goal you are penalized a small bit. At the end of the 10 week period you get back all the money you put up if you meet your goal. If you don't meet your goal you get back the money you put up minus any penalties.

Fairly simple, I think. Check out my profile here. I'm certain that by mid-January I will be at least 30 pounds lighter (and I'll fit into more of my Hawaiian shirts!).