The other doughnut you have to have while in Portland is from Voodoo Doughnuts. While Blue Star focuses on simplicity, quality, and unique flavor profiles Voodoo answers the question, “How much Capt'n Crunch can you get on a doughnut?”

My go to, pictured above, is the Maple Bacon Bar. As I said to Marisa: the Blue Star is better but I like the Voodoo doughnut more. It just tastes like what I want a doughnut to taste like… and I feel like Blue Star is just a touch pretentious.

Posted at 03:12 AM in Blankbaby Approved, Eating, Food and Drink, Travel | Permalink | Comments (0) 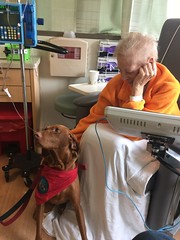 My mom, Joan McNulty, died from colorectal cancer. It isn't on of those "glamorous" cancers that you hear so much about, mostly because I think people are more comfortable talking about breasts and lungs than they are colons and rectums.

50,000 people a year die from colorectal cancer, and it is very treatable if detected early!

In order to help lower that number I'm running the 2017 Philadelphia Indy 5K this September. All donations go to help the Colon Cancer Alliance to get the word out, fund research, and help someone else's mom not die from this type of cancer.

The Internet is an amazing thing. Today’s evidence of this: Larp Trek.

I found out about this amazing comic from Carrie Anne, who will be appearing on a future episode of Random Trek. When she told me about it she said, “You’re going to lose a lot of time to it.” She was right.

Here’s the idea behind it: the holodecks are all offline on the Enterprise and the TNG bridge crew needs something to entertain them. Geordi decides to game master a role playing game where each of the crew members plays a character on the fictional space station “Deep Space Nine."

That’s right, this comic imagines that DS9 was a campaign in an RPG played by TNG characters. I can’t even.

Just read it. Read it now. Start at the first page. If you like D&D and Star Trek you won’t be sorry.

Also, if you like D&D, Star Trek, AND podcasts, you should listen to:

I didn’t even want to do RoboCop 2. When I was doing RoboCop 1, I knew what a brilliant movie this was going to be. I did RoboCop 2 for a paycheck. It was a pretty good film, but I was done with it. And I really wanted to do Naked Lunch. That was a seminal book to me."

Who says I have an eReader problem?

I can stop buying them at any time, honest!

Here they are, starting with the silver one in front:

Clearly, I really like eBook readers... and I'll never recoup all the money I've spent on them but life is too short NOT to have 5 eBook readers (we actually have 6 in the house since Marisa has a Kindle 2 of her own).

Better pictures will follow, but we're getting hitched (the other person being the lovely Marisa).

There are things in life that seem to need no improvement. Would you slap on another coat of paint on Mona Lisa? I think not. Would you change one strand of wig hair from the head of William Shatner? Not if you know what's good for you.

Thomas' English Muffins were also in the pantheon of perfection, that is until I tried Thomas' English Muffins Honey Wheat. This, my dear friends, is the best thing to happen to the English Muffin industry since the invention of the nook and/or cranny. I can not put into works how tasty these freakin' things are. They make normal English Muffins taste like day old salamander goo (and I don't even know what that is, let alone what it tastes like... but it can't be good).

Give 'em a whirl, and let me know what you think.

Tonight I had the good fortune to see Max Raab & the Palast Orchester in concert, and I must tell you that was the best $40 I have spent in a long time. Those Germans sure do know how to entertain, and entertained I was.

If you aren't familiar with Max Raabe, shame on you! He is a German cabaret singer who sings classics from the 20's and 30's backed by the Palast Orchester. Tonight they entranced a crowd at the Kimmel Center for a few hours, and we were transported back to a different time. I felt like we should have all been dressed in our finest (tuxes for the gentlemen and evening gowns for the ladies) whilst dancing on a large black and white checkered marble floor. Good thing we weren't though, since I was something of a third wheel (though in this case I was a fifth wheel). I would have been dancing with myself and we all know what that's a euphemism for (or is it?).

Max has that 30's sound down pat (if you don't know what I'm talking about think a cross between nasal and tinny, but in a good way) and the Palaster Orchester know how to play (and the lone dame in the group is quite the looker to boot). They seemed like they were having the time of their lives and that energy was sent to the audience, who seemed to enjoying the evening just as much (each number's completion was met with a rousing round of applause).

During intermission I used the restroom (they are nice) and then attempted to purchase a CD. There was one lone CD salesperson who was besieged by Raabe-heads jonesin' for a CD. People were just slapping $20 bills on the table faster than he could hand out the CD's. I was a good man though, and I waited my turn. I was rewarded with a copy of the same CD that other, pushier Max Raabe fans bought but I got something that was much more valuable than any CD: an air of superiority over those other gauche concert goers. Shoving is for plebeians.

Favorite moments of the evening? Here are a few:

Sherri and Badger were also in attendance, though I hear Badger was a naughty boy. Badgers, ya can't take 'em anywhere.

A big thanks to Becky, of Good Grief! fame, for organizing this outing.

A summer evening brings with it several things, amongst them heat and discomfort. However, I have found the remedy for the foul summer and it can be yours for about 4 bucks.

Of what do I speak, you ask?

Why, Haagen Daz Raspberry Sorbet. What is not to like? It is tasty, fat free, and above all tasty (yes, I know I said that twice but it sure as heck tastes good).

Do yourself a favor and give this fine product a whirl, it is just what Blankbaby ordered on a hot summer's eve. 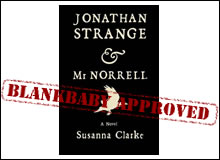 Julie was kind enough to let me borrow "Jonathan Strange & Mr. Norrell" a few weeks ago, and I assured her that I would be done with it within a week. A week turned in to a fortnight, and yet the 800 page tome still bested me.

It sat on the floor mocking me. It seemed to say, 'You aren't man enough to finish me, boy.' To which I replied, 'Oh, yeah?!'

I did finish it, and I enjoyed it immensely. Why did it take me so long to finish it? Well, it has been a rather busy few weeks here at Blankbaby headquarters what with the surprise Christmas parties, the awarding of prizes, the treks to far away lands and what have you.

The book itself was a joy. I love footnotes, and this novel was chock full of them, and they were my favorite kind of footnotes, footnotes that told a story that was different than that of the main characters. I suppose one could read this novel and skip the footnotes, but I wouldn't recommend it.

If you are in the market for an 800 page novel about magic returning to England then look no further than "Jonathan Strange & Mr. Norrell".

And yes, Hilary, this means I will finally be passing along the book to you.

This is the inaugural post in a new category, 'Blankbaby Approved.'

What is this all about? I often want to write reviews about various products but I don't want to clutter the site with categories for software reviews, movie reviews, book reviews, and random reviews. My solution? Create a catch all category, with a little logo, and have at it.

I have been using MarsEdit since it was in beta, and it made me change my opinion of weblog editing software. I tried using ecto a long time ago, and it left me thinking, 'why would anyone need to use a blog editor?' And then Ranchero Software announced that the blog editor in NetNewsWire would be seperated into a stand alone product (and would be completey rewritten). Not only that, but if you paid for a license for NetNewsWire 1.0 (which I did), you get a free upgrade to 2.0 (not out yet), and a free license to the new weblog editor, MarsEdit (which just reached 1.0 a few days ago).

The highest compliment I can give MarsEdit is that I can't imagine posting to Blankbaby without it. MarsEdit is an indispensable part of my blogging toolkit, and it looks like it will just get better.

MarsEdit, consider yourself 'Blankbaby Approved.' Please use your powers for awesome.