What I've been reading on my Kindle

I heart my Kindle, and as many of you know I've in the process of writing a book about the Kindle for PeachPit (I only mention it now because I am fairly certain that it will, in fact, be published at some point next month).

After finishing my last book (which you really should buy, if you haven't already) I really didn't feel like writing much of anything, so I went on a reading binge. It seems like that is my natural reaction after writing a book because I did the exact same thing this time around (though the book isn't finished just yet, we're still in the editing process... but I'm such a fantastic writer that I need little editing. That sound you hear is my editor, Kathy, laughing her head off).

One of the unfortunate side effects of this is that Blankbaby lays fallow, so I thought why not write up a post about the books I've read in the last few weeks? Heck, I'll even link to them on Amazon so that if you want to read them yourself I'll get a little kickback (hey, I need to support my reading habit somehow!).

The Lost City of Z: A Tale of Deadly Obsession in the Amazon

I'm reading this at the moment (though I'm reading the Kindle edition, which Amazon won't allow me to link to with my associate link for some reason) and so far it has done a fantastic job of convincing me that no sane person would ever venture into the Amazon to look for anything. The word 'maggot' appears far too often for my comfort, and yet Grann has so far spun the tale of English explorer Percy Fawcett's obsessive search for the Lost City of Z in a truly fascinating way. Grann even goes as far as retracing Fawcett's route himself.

I haven't finished reading this one yet, but all signs point to it being one of the better books of non-fiction I have read in awhile. If you aren't squeamish I suggest you check this book out (I would lend you my copy, but sadly that is one of the areas in which buying the physical book is better than the Kindle version).

These are the books that I have recently finished reading (all on my Kindle, of course, and the vast majority of them on the Kindle DX).

How I Became a Famous Novelist

I had no idea who Steve Hely was before I started reading this book, but I so enjoyed it that I did a little looking into his history. Turns out he was a writer for the Late Night with David Letterman, which explains why I found his sense of humor to be so entertaining (though now he writes for American Dad, which I don't find to be all that funny).

This book tells the tale of guy who gets laid-off from his job writing college admission essays for wealthy kids and decides to write a Serious Work of Fiction. Here's the kicker: he thinks all the Serious Fiction writers are full of crap. He comes up with a list of rules that he follows while writing his book to appeal to the sort of person who looks for the Oprah Book Club sticker on a book's front cover, all in an effort to be a best selling author.

I won't ruin the book for it, but let's just say that it turns out getting on the New York Times Best Seller list doesn't solve all of life's problems.

There is a physical edition

available, if you prefer your books to take up space.

The Good Thief's Guide to Amsterdam

and The Good Thief's Guide to Paris

both by Chris Ewan

These two books (a third is on the way) make up the Charles Howard series of mystery novels. Charles Howard, the main character, is a mystery writer by day and an international thief by night (though he isn't as impressive as the thief character in his fictional series of mysteries. Confused? Don't worry, it isn't as confusing whilst you're actually reading the books).

These books are very entertaining, and very quick reads. I don't know why I don't read more mysteries, but the Good Thief Guides have shown me the error of my ways.

It doesn't hurt that Chris Ewan is a Mac user, has a blog, and uses TypePad just like me (makes me think that I might have a novel or 5 in me as well!). Pick up Amsterdam

(though you should read Amsterdam first) if you're looking for a nice light read.

The Spy Who Haunted Me

Oh, Simon R. Green. He is something of a guilty pleasure for me. I've read almost everything the man has written, and I buy every one of his new books without even glancing at the summary to see what they are about... and yet... he really doesn't write all that well. Don't get me wrong, he has some fantastic ideas and he presents them in a very interesting and entertaining way, however, his ideas are often much better than his prose. I will give him this, though, the man has lots and lots of imagination (he reminds me of Piers Anthony in that respect).

Anyway, I'm not going to bother explaining what this book is about since it is the third in a series and none of it will make sense unless you've read them. Suffice to say I enjoyed reading it, but this type of book is the perfect argument for the Kindle. It is fun to read, but you'll never re-read it again so why take up valuable space in your home storing it for who know how long? However, if you want to buy a hard copy

don't let me stop you.

So, that's what I've been reading. What about you? 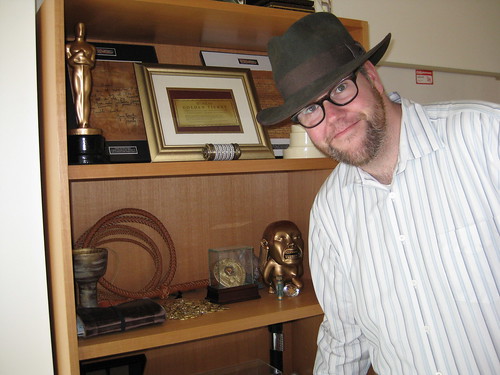 My life is an adventure, I tells ya!

Is having the same book on it twice. Hurrah for the Kindle edition.

The last video of the week

I hope you have enjoyed watching all these silly little videos. This last one is a little bit of a cop out, but man the gym kicked my butt.

Here are the other videos in the series (in reverse chronological order, of course):

The sixth video in my week long series of video posts. Check it out on Flickr.

The fifth in the series (I didn't think I would keep this up, did you?). If you can't see it in this entry check out the video here. It is a typical work day compressed into just under 2 minutes.

A Tour of my desk

A quick tour of my desk for my fourth video of the week!

Last weekend I was fortunate enough to take part in Hidden City Philadelphia, an arts festival with a twist. Art installations are setup in buildings and places in the city where normal folks usually aren't allowed. It is a neat way to see some things that are 'hidden' and take in some art at the same time.

I was armed with a camera (of course) and took a bunch of pictures (some of which don't suck!).

Happy 4th of July all!

Video 2: A Pound of Dice

I ordered a Chessex Pound-o-Dice and then I made a video.

Here's the post explaining why I am doing this.

A week of videos

I've been pretty quiet on the blogging front (well, at least here, I've been blogging like a mad man for the day job!) because I was writing my second book (OMG! I know! I'll have more to say about this in the coming days).

However, the first draft of my book is done so I have a little more time for random crap (huzzah!). I was thinking about what I could do and I remembered I have roughly 14,000 video capable cameras in my possession so why not create a video a day for a little while?

The first video is embedded here, and I'm asking you to suggest some ideas for future videos. Come on, you know you have some great ideas!