These drugs are making my heart beat correctly 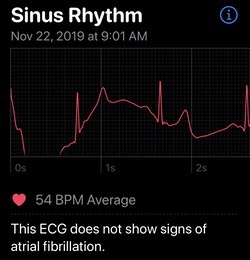 Yesterday I woke up early to go for a 4 mile run. Usually I run after work, but I wanted to get my run in early just in case I ended up in the hospital. Gotta get my 10,000 steps!

You see, I had my followup cardiologist’s appointment at 9am and I was worried it would go along the same lines as my last appointment.

I’m happy to report that I didn’t end up in the hospital after my appointment. My cardiologist told me that I’m very healthy, other than my arrhythmic heart, and that this isn’t something that people die from. It is annoying, but not deadly.

He was also yawning a lot as he spoke to me. I sense he isn’t a morning person.

But how does one live with an out of rhythm heart? Turns out I have two options:

* Take a few pills every day for the rest of my life.
* Let them stick catheters in my heart, burn some flesh, and hope that stops the arrhythmia.

I opted for the drugs for the time being as I’ve been in aFib frequently over the last few weeks but popping a pill pretty much stops it. I’m hopeful that taking a couple of pills regularly will solve it for the time being (and so far it is! Though I’ve only taken the new combo twice thus far).

I’m on a drug called flecainide, which Wikipedia tells me is the 273rd most commonly prescribed medicine in America. It is a sodium channel blocker that stops arrhythmic heart beats which is pretty cool. Interestingly, though, one of the potentail side effects is making your arrhythmia worse, so that’s not great. It seems to happen in very few people but I will be ever vigilant!

If the drugs stop working, or I get tired of taking two pills twice a day, then my heart will get ablated! Basically, they burn away some groups of nerves in the heart and that SHOULD make the arrhythmia stop.

My doc tells me that for about 85% of folks it works on the first try. And if it doesn’t work you try try again and that bumps up the effectiveness to 90%. The only downside (other than surgery) is the heart heals itself. So it is possible for the flesh to repair itself and for my heart to go back to its oddly beating ways.

Overall, I’m pretty glad my heart conditions aren’t more serious because while the doc was very knowledgeable and answered all my questions he wouldn’t actually recommend one way over the other. I thought it wise to wait until after the holidays to schedule surgery, but I think come February my heart will be burnt from the inside.