Thoughts on the Kindle’s Present and Future 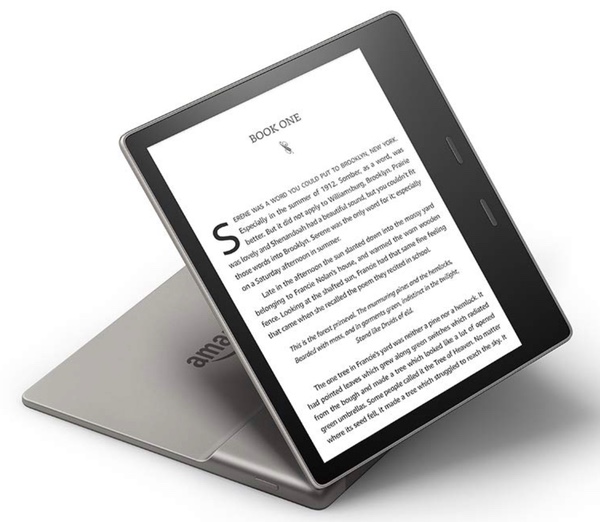 I've been meaning to write about the things I want to see in a new Kindle for awhile. This post has been percolating in my head for so long, in fact, that a new Kindle Oasis was released awhile back.

Thoughts about the new Kindle Oasis

Of course I ordered the new Oasis as soon as it was available (after checking with Marisa, of course!) and I just finished reading a book on it (The Right Stuff by Tom Wolfe, which is excellent) so I feel like I can have an opinion about it. This version takes my favorite Kindle ever, the Oasis, and improves it slightly which means it is now my favorite Kindle ever.

This version doesn't add too many new features, but the additons are nice:

If you want to read a more robust review of the Oasis check out my pal Jason Snell's review. I pretty much agree with him on all points, including the fact that most people should just get a Paperwhite.

Features I’d like to see in the next Kindle

Before I share my list of desired features let me say right up front that I have no idea if any of these are feasible (well, I know some are!). That’s the lovely thing about making a list like this: I don’t have to figure out how to do it, I just know I want them!

With that out of the way, here’s my list:

Will we see anything like this in the next Kindle? I have no idea! Will I still buy whatever Kindle they come out with? Probably.

Is the Kindle mediocre?

As I was writing this Jason wrote a post lamenting the Kindle’s current status and its boring future (i.e. more of the same).

Usually, I agree with Jason but this time we are in differing schools on one particular point. I would like Amazon to stick to making the Kindle disappear while you’re reading a book. Nothing too flashy is needed when it is just a container for whatever book you might be reading.

Jason suggests that perhaps Amazon missed an opportunity to make the Kindle a hub of all the text people read by offering up apps (from The NY Times and other publishers) from an App Store (I assume). That would make me sad. Several years ago I wrote about how much I liked the fact that the Kindle really one does on thing well: allows you to read a book without distraction.

I can see the allure of adding apps to the Kindle but I think that would be contrary to the entire reason the Kindle exists. Now, a Kindle Fire sporting a color eInk screen is something that I could really get into (which would include the Kindle app, and several other apps).

That’s not to say that there isn’t room for improvement with how the Kindle handles reading books, I’d just hate to see the Kindle lose focus on that (though, admittedly, Amazon doesn’t seem all that focuses on pushing the state of the art with the Kindle which is Jason’s main thesis… and one that brings us back into agreement. Hurrah! I don’t like it when we fight).

2 responses to “Thoughts on the Kindle’s Present and Future”