It has been almost 2 years since I decided to drop some pounds and sign up for Weight Watchers. Over those two years I've lost nearly 130 pounds: 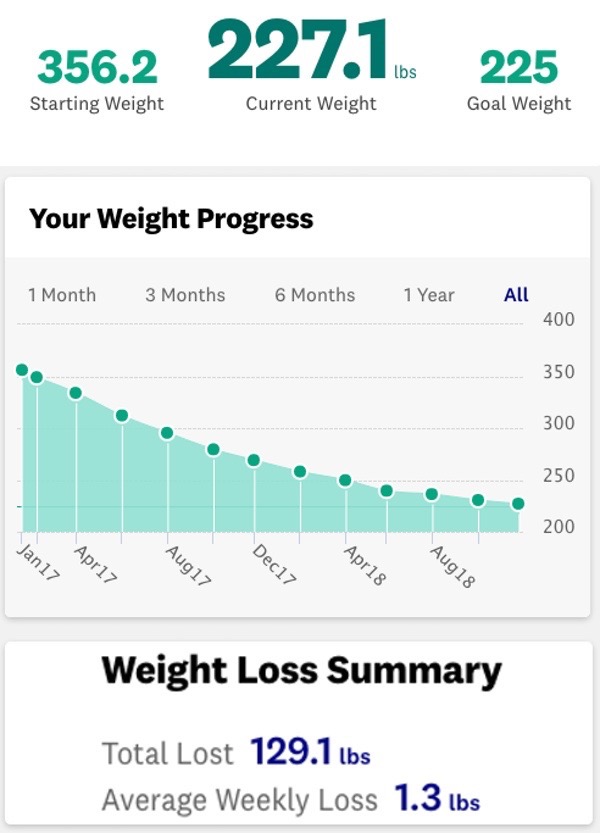 This is the most successful dieting effort I've ever tried and 2018 just continues the success.

I'm pretty sure at this point I weigh less than I did in high school. It is still a surreal experience for me to buy an XL shirt and have it fit. Mind blown, man.

Some folks surely think, "Scott, you've done Weight Watchers for 2 years now, surely you can just save some money and watch what you eat."

Ha! My experience over the holidays in which I gave myself a holiday from tracking my food shows me that I still have no idea how to feed myself properly (though I do know how to get rid of a lot of shortbread in a short amount of time). For me, Weight Watchers is going to be something in my life for the foreseeable future and I'm cool with that.

The secret to my success is a seldom talked about combination of watching what I eat and exercising. 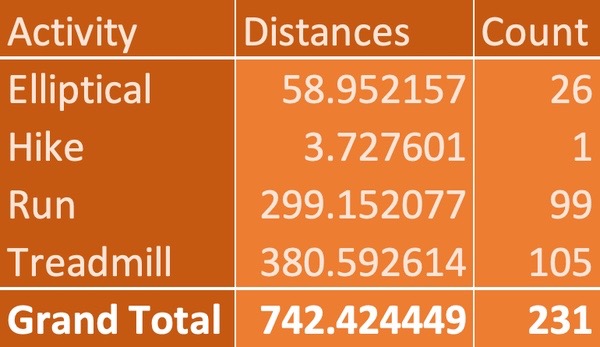 I use my Fitbit watch to track all my exercising over the year and as you can see I worked out 231 times in 2018.

My exercise of choice is running, and I was surprised to see treadmilling edged out running outdoors. Who knew?

I opt for the elliptical when all the treadmills in the gym are taken OR after I've fallen down on a run, banged up my knee, and it hurts to run but doesn't hurt to elliptical.

That lone hike? It was in Northern Ireland and it was awesome.

Given how often I ran this year it would be very sad if I didn't improve at all. And I did! Here are my best efforts of the year (and of my life):

CELEBRATE ME... with an odd assortment of gifts 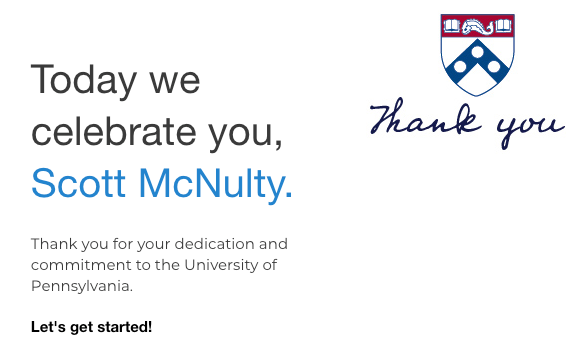 Just the other day I was at dinner with some friends and I was trying to recall how long I'd worked at Penn. I couldn't remember (since I can hardly remember anything) so I did what anyone would: I looked at my LinkedIn profile.

Turns out I could have waited a few hours because I received an email telling I was celebrating 15 years at the University. Hurrah! And, more importantly, I get a gift in recognition of my service.

Not only do I get a gift, but I can pick one out from... well, a very strange assortment of things.

Now, I'm not complaining because I appreciate the token of appreciation and I am very happy that I can pick something rather than getting a picture frame or something. I'm just struggling to find a theme with options that include:

A grippy thing to put your phone in... for gaming?

An umbrella, which in and of itself isn't odd but it isn't a Penn branded umbrella which I find odd.

A glass(?) bowl. This one looks pretty nice, actually, but I don't think I'm in need of a bowl.

A telescope! This is the one that I am most tempted to get, however, I don't really have any place to keep it and I'm pretty sure I would never actually use it.

And my favorite time: the 1.5 gallon beverage dispenser. I should get it and fill it with champagne to CELEBRATE ME!

2018, in many ways, was a pretty crappy year for many people. It was, however, a pretty OK year for me personally and a great year for reading.

I managed to read 101 books this year (that’s over 35,000 pages!), the most I’ve read in a year since I’ve been keeping track. How did I do it? Well, I took the time to read books. This isn’t rocket science, people.

I always think it is interesting to see what the gender breakdown of the authors I’ve read over the year happens to be. Now, I should say that I know many folks decide at the start of the year to mindfully read more books by a certain population. While I fully support that, because who I am to tell you what to read, that isn’t something I’ve ever done with purpose. Which made it all the more surprising to me that this year I read books mostly written by women: 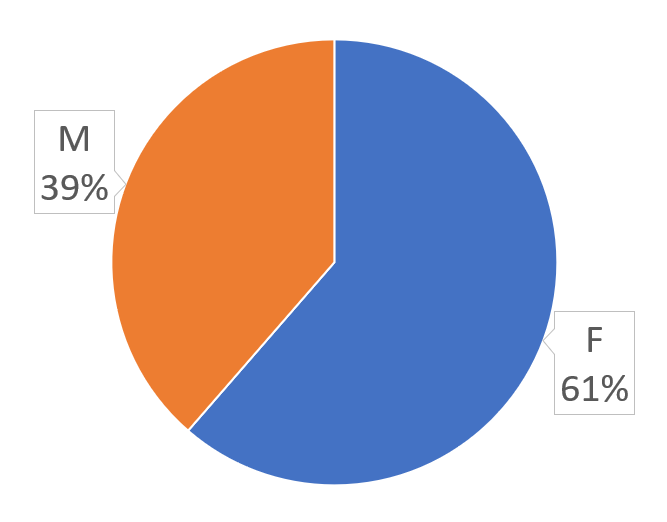 As I see it there are a couple of reasons for this:

Here’s my ranking breakdown of those 101 books (since I use Goodreads to track my books the ranking scale is 1 - 5): 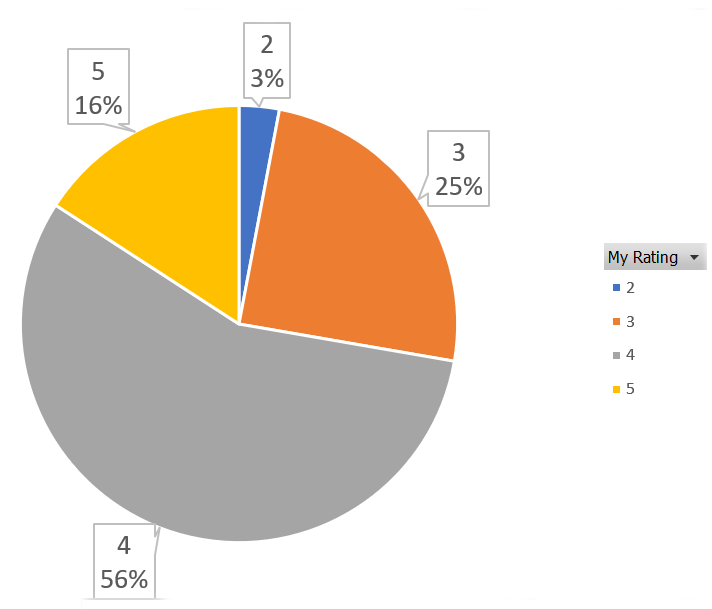 As you can see, I’m a pretty generous 4 star giver. For me, if a book is fine (i.e. it entertains me) it gets 3 stars. A book that I think is well written and entertaining gets 4 and 5 stars go to books that I really, really liked. 2 stars go to books I wouldn't recommend to anyone, but I finished since they weren’t awful. And this year I didn’t read any 1 star books because time is too short to read books you aren’t enjoying on some level (unless you have to read them for a class. Stay in school, kids).

Tell me what to read, Scott

I know a few paragraphs ago I said it wasn’t my job to tell you what to read… but here are some books I think you should read.

Now I should say that the list below doesn’t include all of my 5 star reads of the year. You can see the full list on my Goodreads account.

One of my favorite things in the world is discovering a book series that just sucks me in, and this year it was an absolute pleasure to read the Ruth Galloway series by Elly Griffiths. I read the first 9 books in the series pretty much back to back. I stopped at 9 because the 10th in the series wasn’t out yet… but it did come out this year and, of course, I read it. I also read her other series (the Magic Men Mysteries) so I think I’ve read something like 13 of her books this year… and I regret nothing.

Ruth Galloway is an unlikely sleuth (aren’t they all?). A single middle aged archeology professor at a small regional school with a very specific specialty. And yet she gets mixed up in all sorts of dangerous situations. As is the case with any mystery series the cast of recurring characters must be interesting, and Elly Griffiths delivers on that front as well. These books are a delight. The only problem is that I’ve already read them all!

The 7 1/2 Deaths of Evelyn Hardcastle by Stuart Turton

Another mystery! It starts off as a pretty typical murder at a Manor but this one has a twist - the main character jumps perspectives and the story resets itself multiple times.

I don’t want to say too much about this book but I very much enjoyed it.

Killers of the Flower Moon by David Grann

This book certainly doesn’t need me to tell anyone about it. The hype around it is certainly deserved. A compelling story about a horrifying episode in American history. I knew the US Government had been horrible to Native Americans but this book showed me that it was even worse than I thought.

The Moons of Barsk by Lawrence Schoen

I couldn’t have a book list without a science fiction novel on it, now could I? This book was one of the last books I read last year and one of the best. It is a sequel to Barsk which was the best novel about an elephant with psychic powers in a multiple planet spanning civilization I’d ever read. The first book, as you can imagine, was pretty banana pants (and I mean that in the best way possible). The second is even better and expands the world in ways that I wasn’t expecting but found most satisfying indeed.

The only bad thing I can say about this book is that it ends on a cliffhanger. That’s good because it means there will be another one (I hope!) but bad because I want to read it now!