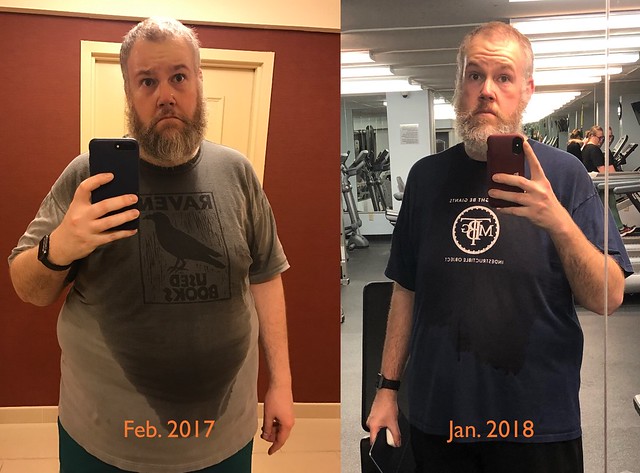 A year ago I, somewhat on a whim, I signed up for Weight Watchers. I figured I'd give it a year and see what happened.

Now, I should say that I didn't think much would happen but I knew I needed to lose some weight and figured, "why not?"

See, I'd lost 100 pounds and gained 80 pounds back (though I managed to keep 20 pounds off, so that should count for something).

I dropped all that weight by not eating carbs and working out. That worked well, but it wasn't sustainable and so I turned to Weight Watchers. 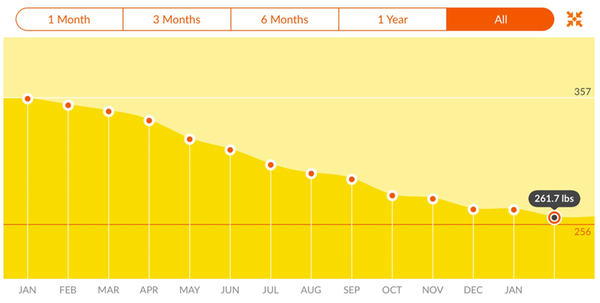 A year later and I've lost 94.5 pounds so far, and the craziest thing is that it wasn't really that hard. Sure, I can't eat whatever I want (and guess what? I generally want to eat lots of stuff I shouldn't eat in quantities that aren't advisable) and I go to the gym more often then I would like, i.e. more than 0 times a week, but overall it hasn't been that big of a change.

My biggest take-way from this last year is that I have no idea how to eat like a normal person. Most people manage to make sensible food choices every day with actively following a set of rules enforced by an app. I just can't do that, however, I'm really good at sticking to clear rules about food (which was way the whole "no carbs" thing was my first choice).

The fact that I can eat whatever I want, as long as I have the points to spend, makes me accountable with my eating. Intellectually, I know that having a doughnut from time to time isn't a big deal... but for me that "time to time" shifts from once a month to once a week to once a day in an astonishing short time.

Weight Watchers also appeals to a strange quirk of mine: I really like to know what I'm going to eat several meals ahead of time. Now I can leverage this oddness to plan out my eating for a couple of days and know what kinds of snacks I can have.

When I signed up for Weight Watchers, as I said above, I wasn't expecting much but I did secretly hope that I would lose 100 pounds by my birthday. At the moment I am far closer to this goal than I thought was possible, but I'm certain I won't hit that soft goal (I've lost about 1.9 pounds a week on average), but 100 pounds is my goal, which I'm sure I'll hit sometime by the end of February.

After that... perhaps another 20 pounds? Sure, why not!

I bought a new computer! 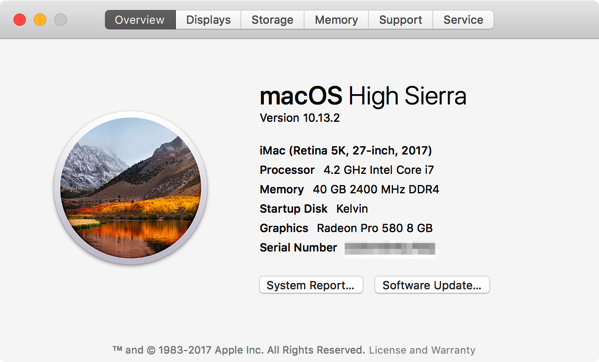 I didn't really need a new computer, but that's never stopped me before!

When the new iMac Pro started shipping it made me think about when I bought my current computer. Turns out I bought it on Nov. 30th, 2012 (Gmail remembers all!).

5 years seemed like a good run for my iMac, so I bought a new iMac (not the Pro because I'm not a madman).

I really like it. The only difference I experience is that is much faster. It looks exactly like my old iMac, and all my stuff works with it so I'm a happy camper.

Though, really, that 5 year old iMac was just fine. But this is just finer.

I wasn't able to join in the fun on the Incomparable's TV Theme Song draft podcast (mostly because I forgot to RSVP for it), so I thought I'd share mine here, because why not!

When you say TV theme song, this is the song that pops into my head. I also enjoy a song that can be read dramatically, so bonus points for that.

Streaks on the china? Never met them before!

I watched way too much Mr. Belvedere and I really like the theme song.

No lyrics, because they are for losers. This theme song is bouncy and fun... plus Marisa had a little dance she would do when it played on the TV. So cute!

I am not a native Philadelphian, but 6 ABC News has the best news theme song ever. When I found out it even had words I was floored. And tempted to move closer to your world.

How do you read so much?

I get asked that question, from time to time (especially at the end of the year when I share that I've read x number of books, 78 in 2017).

And interestingly, I notice that at the start of every year I see a bunch of posts/articles claiming to have the secret to how you can read more.

Here's the real secret: there is no secret to reading more.

You just have to make time for it. You know that time you spend doing something other than reading for pleasure? If you spent that time reading instead, you'd read more.

As readers of this blog may have noticed, I didn't blog a whole lot last year (or the year before). And as the even smaller number of people who track my tech book writing have noticed... I haven't written a book in a very long time!

Don't get me wrong, I still write a lot but the vast majority of my writing is for ye olde day job. I seem to have fallen out of the habit of writing for pleasure. 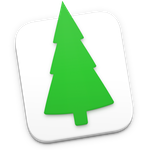 I was reminded of this fact by two related things. I decided to switch RSS readers from NetNewsWire (which I've been using forever) to Evergreen (which the original developer of NNW is working on). I did this for a couple of reasons:

Moving my feeds into Evergreen gave me the opportunity to go through and do some feed pruning. I was clicking along happily until I came to my "Philadelphia" folder.

I discovered that most of the blogs in that folder have long been abandoned and I re-read this blog post Marisa wrote awhile ago bemoaning the lack of personal blogging in general.

Therefore, I'm really going to try and write stuff here (and maybe in other places, though I really doubt anyone is interested in paying me to write anything at this point).

I think the first thing I'll write is a post about why I abandoned my Apple Watch and embraced the Fitbit life. I'm sure everyone is dying to know!