Twenty Trillion Leagues Under the Sea by Adam Roberts 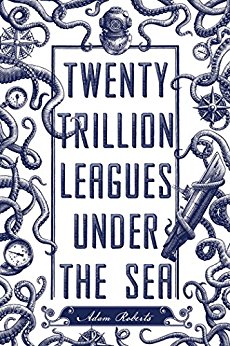 Adam Roberts is one of those authors who writes whatever they want, and damn the marketability. Generally I enjoy his work, and he is a very talented writer. This book wasn't his best work, though I did think it was quite interesting and I almost enjoyed just as a physical object.

The cover is gorgeous, and the illustrations are generally very good but… the copy editing is just bad. I usually don't even notice the odd mistake here and there, but this book was littered with them. It was distracting (and not the author's fault, but it didn't do him any favors).

And then things get crazy, and none of it is good for the crew.

I would say this book ends up being interesting rather than good.

Who should read it: Big fans of Jules Verne and French people, I guess?