The Stone Sky by N.K. Jemisin 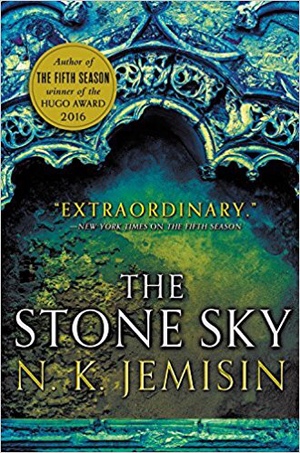 Trilogies can be tough. The first book is exciting because you're discovering a whole new world populated with interesting characters (at least in good ones!), the second book generally moves the story along and not much more, and the third book… the pressure is on to stick the landing. If you have a bad conclusion it can have the power to sour people on the previous two books, plus who is going to recommend a trilogy with a bad final book?

I'm happy to report that The Stone Sky, the final volume in the fantastic The Broken Earth trilogy, does not disappoint. It is a well written and satisfying conclusion to a very good trilogy. Seriously, if you haven't read any of these books you should totally do it.

My one complaint is an odd one: I almost feel like the third book explained too much of how the world got to be the way it is in the trilogy. Now, I know that lots of people will be very happy to find out the details, but I think I would have preferred a little more ambiguity. That's just me, though, since I tend to enjoy books where I have little idea what is going on (which was pretty much the case in the first two books of this series).

I won't bother to try and recap what this book is about, but I will say it is a very interesting mix of fantasy and science fiction.

Would I read it again: I can imagine myself re-reading this trilogy again at some point (much like the Foundation trilogy, which is probably my favorite trilogy of all time).