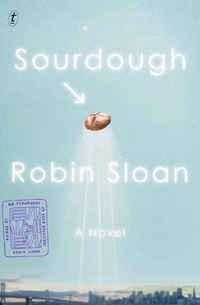 Robin Sloan’s work (his previous book was Mr. Penumbra’s 24 Hour Bookstore) tends to teeter on the edge of twee. Though his is a very modern twee set, generally, in a version of San Francisco that is both recognizable and slightly off kilter from reality.

In fact, I found myself in San Franciso a few weeks ago so reading a book set in that city (though this book is “of” San Francisco the city itself doesn’t play a huge part in the narrative) was a nice reminder of my time there.

A story that you’ve heard a million times!

At first I was skeptical since Sloan’s first book followed a very simliar plot (though in that story a former programmer stumbles across a mysterious bookstore that changes his life), but in the end the charm and wit of the writing won me over. As did the inclusion of Silicon Valley types sucking down packets of a food subsitute called “Slurry.”

Who should read it: Foodies or techies (or techie foodies) will eat this book up. See what I did there? Eh?