Ruin of Angels by Max Gladstone 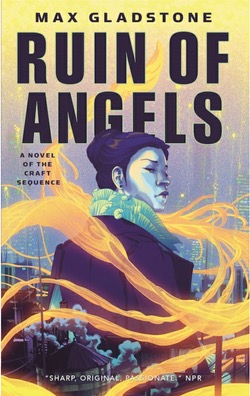 Recommending a book that is the 6th in a series isn’t something one should do, however, the Craft Sequence isn’t a normal series. If you read the series in publication order, as I have, you’re actually reading them out of chronological order. This might seem strange, but the upshot is you can pretty much start the series at any of the books. And you should.

I’m not a huge fan of urban fantasy, which is why I was so surprised when I read a review of “Ruin of Angels” describing it as such. Upon further reflection it does make sense: this is a world where lines of contracts power magic, ever living skeletons run corporations, and gods trade faith for power.

Ruin of Angels is a good jumping on point, and for $3 (ebook) it is a great deal. If you’ve read any of the other books in the series you’ll recognize some of the characters featured.

I suppose I should point out that all the main characters are women, which I guess is either a plus or minus depending on your point of view.

Who should read it: Anyone who has read any of the Craft Sequence, or if you’ve ever wondered what a space program powered by magic might look like.