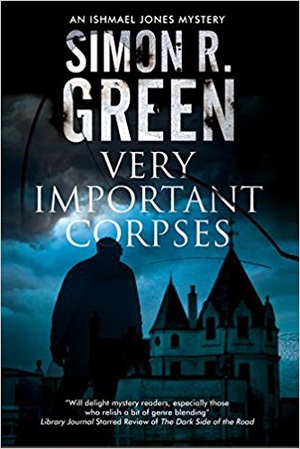 Another book by Simon R. Green! I borrowed this one from the library and read it in a day (it is both a quick read and a short book).

Ishmael Jones, the hero of this Green series, is an interesting character even if he talks pretty much like every other Green character. He's an alien that crashed landed onto earth in the 60's and who's ship recoded his body to be human. Though in the process he lost his memory, so he's been working for a variety of secret organizations (which is what all of Simon R. Green's characters do). They get his services, and he gets to move around and lay low even though he seemingly never ages.

Green takes this interesting character and throws him into mysteries that have a dash of the supernatural. This novel finds Jones, and his lady friend, on the shore of Loch Ness in a great house with a sorted history that is playing host to a secret cabal's annual meeting. Someone, or something, is killing people and Jones needs to find out who!

It is pretty obvious who is doing the killing, but it was an enjoyable tale (and much better than the last Green book I read. I do find it amusing that Jones isn't a fan of the ghost hunting organization that makes up the main cast of the series of which I am not much of a fan).

Overall, this did what I expect of a Green novel: took a few hours to read, made me chuckle a couple of times, and was generally pleasant despite the amount of gore.

Who should read it: If you like supernatural mysteries and manor houses you could do worse than this book.

Would I read it again: Nope, but I'll read the next in the series (I won't buy it, of course!).