The Gunslinger by Stephen King

I am a master of timing, I tells ya.

Fellow Incomparable folks have been singing the praises of the Dark Tower series by Stephen King for a very long time and yet I've been resistant to start reading it. I think mostly because I have boxed away King in my head as a horror writer and I am not so into horror as a genre.

I know this is unfair to the very talented Mr. King, and so with the advent of the movie based on the Dark Tower series I figured now was a great time to try and borrow the book from the library. You know, when everyone else had the same exact idea:

I was content to wait my turn when from the North came a Bookslinger who ended my wait by shooting the ebook onto my Kindle: 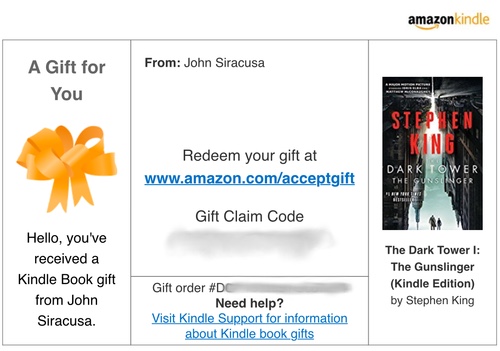 Now I really had to read it! Though I was concerned that I wouldn't like it and disappoint some people I jumped into it.

The first thing I realized when I started reading was that I really knew nothing about the Dark Tower series (I assumed a tower was somehow involved). This ignorance was cleared up by not one but TWO forewords by the author in the edition I read. It was interesting to read the two and notice how his writing style has evolved over time, plus I found out this was King's attempt to write an Arthurian legend set in the Old West.

That was a bit of a red flag for me: I'm not big into westerns but while The Gunslinger is certainly informed by westerns (and people in it love to palaver) it is really something else entirely.

The book does a good job of setting up Roland and the Man in Black as opposing forces in the quest for the Tower. Really, the whole book is one long case scene intercut with some world building (that train station!) and flashbacks to Roland's life. It was well structured and a quick read.

It does suffer from what some first books can suffer from: a lot of setting up the pieces on the board but not much actually happens. There are some encounters with mutants, some death, and eating some rabbits but mostly this book is about one dude following another one across a desert, over the mountains, and then camping with him for a little bit.

The real question is: was it good enough to make me want to read the next book in the series? Yes, it was. I've already but a hold on it at the library. Now I just have to wait for 50 people to read it ahead of me.

Who should read it: I assume if you're a fan of Stephen King you've already read it, but if you are and you haven't… you should!

Would I read it again: Nah, but I will read the next one.