Plaid and Plagiarism by Molly MacRae 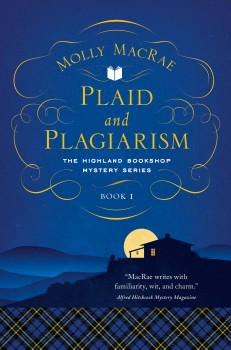 The world is anything but cozy at the moment what with severe weather, missile launching madmen, and more than one Trump in the White House (I know, some of you are happy about that… though I have no idea how you could STILL be happy about it. I get voting for him… kind of… but it is pretty clear he's not suited for the job) and so I turn to books that'll transport me to a nice, gentle place. Oh, and include a murder.

That's right, I read the cozy mystery “Plaid And Plagiarism,” and I gosh darn enjoyed it. It isn't a heartbreaking work of literature, or a particularly good mystery, but it is like slipping into a warm woolen sweater. Plus it features a number of women characters, which is always nice. And I didn't even mean to read it! Marisa picked it up at the library and I saw it laying on the table… and read it.

The high number of women in the book isn't a surprise given the story centers around four women who buy a bookstore in Scotland, and end up involved in a murder of a local. The two main characters (the older of the four) were a little hard to tell apart at the start of the book, but soon developed unique characteristics that helped me remember who was who.

The central murder isn't dwelled upon, and it seems to not trouble the townsfolk as much as I think it would (even if the victim wasn't the most popular person). Oh, and the title does sort of gives a plot point away, which is a shame but I understand the allure of alliteration.

This is clearly the start of a series, and while I won't excitedly be looking for the next installment I'd certainly pick it up and read it if I found it laying around the house. Ok, so that doesn't sound like a glowing recommendation but really it is a fun little book.

Who should read it: If you like a quick read with a gentle murder set amongst book lovers I think you'd like this.

Would I read it again: I should probably get rid of this section since I almost always say, “No.” Which is a long way of saying, no.