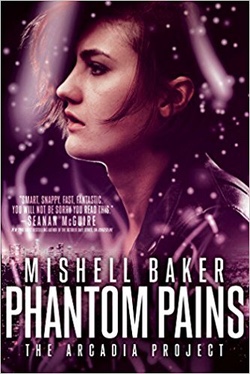 Urban fantasy is not my cup of tea. An urban fantasy book with a blurb by Seanan McGuire is a great way to get me not to read a book.

Mishell Baker's Arcadia Project series is the exception that proves the rule. I had to read the first one, “Borderline,” for a podcast and I really, really liked it.

So much so that I bought the second one as soon as it came out. And then I didn't read it for awhile because, life, ya know?

I stayed up late last night to finish this book because I was enjoying it so. The main character has a raft of issues, and yet she uses what many would consider weaknesses to her advantage. She's great, and she reacts to supernatural situations in a pretty believable way (well, as believable as possible!).

I will say that I thought the final climactic scene was… well not really climactic or exciting. It sort of fizzles away, which in the story makes sense… but it left me unsatisfied. Luckily, the actual ending of the book won me back.

Would I read it again: You're probably picking up by now that I rarely re-read books, and this book isn't good enough to be an exception to that rule. It is quite good, don't get me wrong.