Empire of Time by Daniel Godfrey 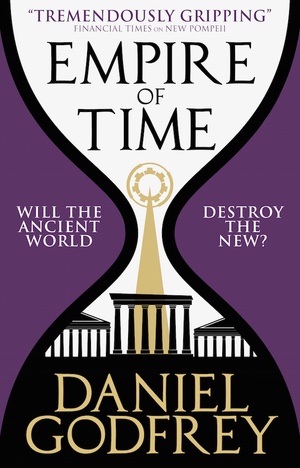 A few years ago we were vacationing in the Hudson Valley. I found myself at a bookstore and I picked up a copy of “New Pompeii” on a whim (and based on the subject matter + the cover). It was entertaining, so when I realized a sequel had been published I bought myself a copy.

Empire of Time jumps ahead 15 years and shows us what has been happening in New Pompeii. Oh yeah, you need to know that there's a time machine in these books capable of plucking things out of the past and bringing them forward in time (but it only works 30 years distant and beyond… or does it?!). A company that created this machine plucked people from Pompeii right before the eruption and settled them into an exact replica of Pompeii (minus the water in the harbor, which was a big tip off to the Romans that they weren't in Kansas anymore).

Things go off the rails in the first book, and 15 years later things seem to have settled down in New Pompeii, though the outside world is falling apart. The main character, Nick, is a modern day man who functions as New Pompeii's ambassador. The world isn't too big on New Pompeii since the Romans continue to have slaves, but the world can't get enough of the garum and knockoff frescos New Pompeii produces so people overlook the slaves.

I don't want to get into too much detail, but this is a very satisfying conclusion to the story (though I don't know if there will be another entry in the series, there certainly could be but you aren't left hanging at the end of this book). To enjoy this book, though, you do need to read the first one.

Would I read it again: I think I would read the series again at some point in the distant future.