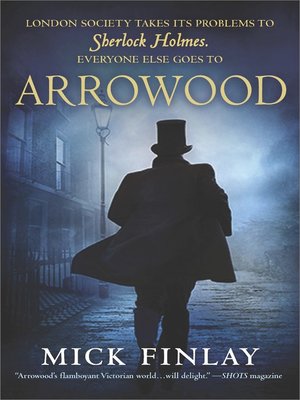 good hook is important for any book, but I feel like it is doubly important for mysteries. There are thousands and thousands of them, and to stand out you need to come up with something unique. “Arrowood” takes the reader to well trodden territory: Sherlock Holmes' England. The hook? Sherlock exists, but not everyone can afford him. When you need someone to help but you can't afford Holmes (or he isn't interested in your case) you turn to Arrowood.

And many characters in the book bring up these similarities much to Arrowood's chagrin. He isn't a Sherlock fan, thinking that Sherlock is mostly lucky (everyone is sure Sherlock is a genius. I assume the two will interact with one another at some point in the future if there are more Arrowood books).

I though the setup of the book was very interest, and the mystery was complex enough. However, the overall execution of this great idea was… well… fine. It wasn't amazing, nor was it bad. It was fine.

Who should read it: This would be a good beach read, I think. If you like to read about darkish mysteries on the beach, that is.

Would I read it again: Nope but I will keep an eye out for the sequel.