Mom and the Beatles 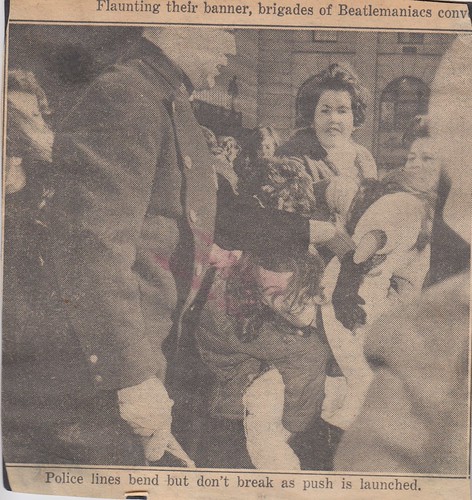 My mom loved music. She kept the radio tuned to the oldies station my entire childhood, which has lead to me having a taste for Doo-wop and 50's music.

She especially liked the Beatles, which makes sense given when she grew up and the fact that almost everyone likes the Beatles.

When my mom was a teenager the Beatles had arrived in New York for the first time. Mom, being a teenager, snuck out of the house and went to the Plaza Hotel in hopes of getting a glimpse of the Beatles.

Her parents were none the wiser to her city adventure until, that is, her father opened the next morning's Daily News to find the above picture featuring my mom (she's the tallest girl in the picture) behind a pack of girls "bending" the police lines.

And thanks to the power of the internet I know this picture was taken on Feb. 12, 1964 by Frank Castoral. You can even order a print of it!

Looks like I'm preordering a new Kindle next week