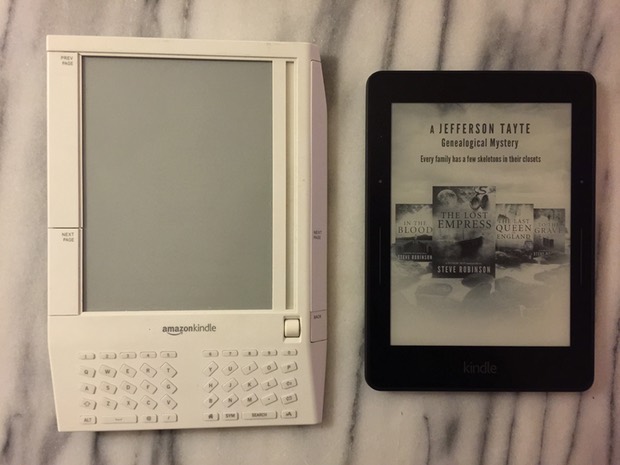 Amazon listened, kind of, with the Kindle Voyage. The Voyage doesn’t have dedicated page buttons in the traditional sense, it has page turn areas either side of the screen. One is marked with a dot (page back) and the other is a line (page forward). Squeeze either and the Kindle buzzes to let you know and the page turns.

I love PagePress, though I will say that the first few times I used it I accidentally paged back by touching the screen when trying to squeeze the PagePress button. It isn’t happening now that I’ve got the hang of it, but something to be aware of.

Now, this isn’t a full review because other people have done that, but I will say that screen is great. Not being recessed makes a big difference (even though I didn’t think it would), and the light seems a little more even than the Paperwhite 2.

Since this isn’t a full review I asked folks on Twitter if they had any questions, and some did. Here they are:

I think this is a reference to Kindle Unlimited (Amazon’s subscription library of ebooks). I haven’t tried it, and Oyster doesn’t work with the Voyage.

Not fragile at all! In fact, since the front is one solid surface it feels a little sturdier to me than the Paperwhite 2 (which wasn’t a flimsy device itself!). I don’t think a case is needed, but I do like the Amazon case that I bought.

Sometimes you should believe the hype, and that is the case with the Voyage’s screen. It is great.

The Voyage’s software is nearly identical to that on the Paperwhite, which means the typography is the same as well. No cool auto-hyphenation or widow/orphan prevention.

I didn’t have a cover on my Paperwhite, but I’m a fan of the origami cover for the Voyage.

It is just as responsive as the Paperwhite 2, which suited my needs. There is a slight lag when you press to select something, but page turns are quick (and that’s what I’m doing most of the time on the Kindle.

One response to “Kindle Voyage thoughts”