The Kindle Voyage is a sturdy little device, and it doesn’t need a case. That being said, I’m very happy that I bought the unimaginatively named Amazon Protective Cover for Kindle Voyage (I have the “royal” cover, though I think I’ll be giving that to Marisa and replacing it with a black cover).

This solves one of the big problems I had with my Kindle: reading as I’m eating lunch. I used to prop the Kindle up against whatever was laying on my desk. Now I can just use the cover!

There is one minor disappointment, though it is more of a failing with the Kindle’s software. The Kindle DX (yes, I owned both) had an auto rotating screen. Turn the device on its side, and the screen would rotate. You could even turn it upside down and the text would rotate.

The Voyage doesn’t auto rotate, but you can set it to Landscape Mode which is handy. Sadly, you can’t rotate the screen 360 degrees. Why does this matter? While the cover is nice standing upright, you can lay it on another angle like so: 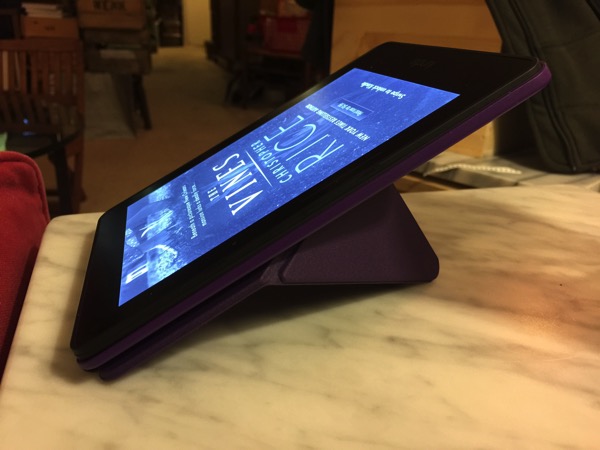 Which would be great if the screen wasn’t upside down. Sad Panda.

That being said, I like the cover and I’d buy another one!