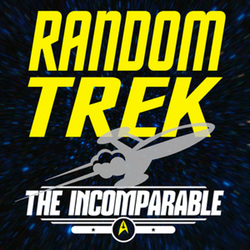 I had this crazy idea: I should do a podcast in which I would be joined by a guest (a single guest) and discuss a random episode of Star Trek.

I know what you’re thinking, “That doesn’t sound too crazy.” Well, here’s the thing, if I’m best known for anything in the world of podcasts it is my silence. I’m not a naturally chatty person and since most of my podcasting appearances involve panel discussions I can sometimes fade into the background. The idea that I should host a podcast and be joined by only one other person seemed daunting to me (I thought the random Star Trek part was a pretty good idea right from the start).

I did what I do whenever I have a crazy idea: I told Marisa about. Since she has had at least three non-consecutive successful conversations with me about a variety of subjects she didn’t think the idea was crazy. In fact, she encouraged me to do something about it.

That’s the other thing about my crazy ideas: they usually stay ideas. I don’t think I’m alone in this tendency. Sadly, for me, I’m also a classic over-thinker. I think about stuff for a long time before doing anything (you can ask Marisa about this too!).

Emboldened by Marisa’s support of the idea I thought about it some more. I pondered who would be a good first guest for awhile and the answer became clear: Jason Snell.

Jason, in addition to being a huge Star Trek fan, is a doer. I figured if he was into the idea the likelihood of it actually becoming a thing would be greatly increased.

Jason did, in fact, like the idea and in turn motivated me to actually do something about it. I registered a domain, I got a Twitter account, and then I thought about it some more.

Now, as I was pondering the podcast Jason launched The Incomparable family of podcasts (The Incomparable, Not Playing, Total Party Kill, and teevee). Random Trek had found a home.

Now you can listen to the first episode (you totally should) and I’m very excited about the whole thing.

Look for new episodes of Random Trek every Thursday for the next 680 weeks or so (assuming there isn’t a new Star Trek series released over the coming 13 years).