Best Gadget I don’t use: Chromecast

I’m celebrating all the things I liked in 2013 with a series of posts I’m cleverly calling 2013 in Review. Click that link to see all the entries.

I’m a bit of a gadget hound, and I’ve bought a bunch of them over the course of 2013. Some I love and use everyday, others not so much. 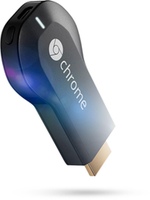 The odd duck of the group is the gadget that I love yet have no real use case for: Google’s Chromecast.

If I love the Chromecast so much why don’t I marry it? Or at least, why am I not using it regularly? Well, I’m already married and my TiVo has replaced the Chromecast. The TiVo trumps the Chromecast for me because it does live TV, records stuff, streams Netflix, and allows me to throw a YouTube video on my TV all without having to change sources (it is also much, much more expensive than the Chromecast so there’s that).

One response to “Best Gadget I don’t use: Chromecast”