Over the last few weeks I've mulled over the options for my next smartphone. I pretty much settled on the Moto X as Scott McNulty's Top Next Smartphone for a number of reasons. I read the reviews, checked the specs, and even visited Best Buy to see how the Moto X felt in my hand. All of this research really got me to thinking about the series of choices which lead me outside an AT&T store in downtown Philadelphia a few Friday mornings ago waiting in line to buy my next phone: an iPhone 5s.

It was the apps, right?

Conventional wisdom goes something like: once you've used an iPhone for a while you're locked in because of all those sweet, sweet apps you've bought. It is true that I've purchased a nontrivial number of apps of the years and I was loathed to "lose" that money.

Being a fairly logical fellow I figured I should take an inventory of which apps I actually used on a regular basis to make sure I wouldn't miss anything running with the Android. I was shocked at the answer. It would seem that I spend the vast amount of my time using my iPhone to surf the web, check email, and tweet.

That's pretty much it, and I accomplish most of that using either stock apps or free apps. All the other apps I've purchased are nice but I hardly ever use them.

The few additional apps I do use (Evernote, Kindle) are big names available on every platform imaginable so they wouldn't hold me back. They're even available on Windows phones, for goodness sake!

I've used a number of Android devices over the years, and it wasn't a very pleasant experience. iOS and the iPhone were light years ahead in every aspect. This all changed when Google's latest Nexus 7 appeared in my life. The Nexus 7 showed me that Android has matured, and it is pretty darned good. For the first time ever I could imagine myself using an Android phone every day without wanting to claw my eyes out (or toss the phone into a nearby body of water).

Despite the non-suckitude of modern versions of Android I still bought an iPhone for one simple reason.

iMessage for you, sir. 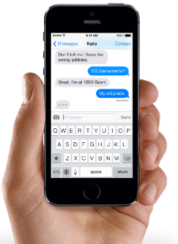 Over the last few weeks my lovely wife has had to navigate the choppy waters of my smartphone decision with me. She's sat quietly as I explained all the cool things the Moto X does, and my reservations about iOS 7 (most of which have evaporated now that I've spent time with iOS 7). She nodded her head and said she didn't really care what phone I used as long I was happy. Awww.

Then it happened. She was texting with her sister when she looked up at me and said, "Wait. If you get an Android phone will I be able to send you iMessages from my Mac and iPad?"

She was so sad at the thought of having to send me regular text messages, like a Visigoth, that I quickly realized that it wasn't the apps, or the design, of the lickablity of iOS that would keep me on the platform: it was how seamlessly iMessage had established itself as a critical way of keeping in touch with my wife that would keep me from switching.

I use iMessage countless times a day to text my wife random pictures, a random emoji of a little dancing lady, and sometimes to tell her important information. Of course I could still do these things from an Android phone but it wouldn't be as seamless, and I'd have to up my text messaging plan.

iMessage was the reason I bought myself an iPhone 5s, despite my wandering eye. Luckily, this is one sweet phone so it isn't as though this is a selfless act. Part of me, though, still yearns to try out an Android phone full time. Perhaps when Apple releases a version of iMessage for Android. I mean that's worked out so well for Blackberry.

I have something of a Kindle problem, so you can bet your hippy that I have the latest Kindle Paperwhite in my hot little hands.

The fine folks at Tech Hive asked me to review it, and review it I did. Check it out. And now I can write my Kindle off on my taxes, though since the government is shutdown at the moment I don't think we need to pay taxes.