Best Book of the Month

I read a lot, but I tend not to stray from the safe confines of fiction. I don’t why, but non-fiction generally doesn’t do it for me. This is what makes my choice for the Best Book of the Month for February 2013 all the more unusual. 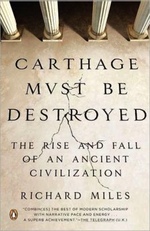 I’ve long been interested in Ancient History. In fact, if I had bothered to fill out the paperwork I would have minored in it during college (I had enough credits but I also loathe paperwork). Generally, my reading/interest centers around the Romans which lead me to believe that the Carthaginians were just an also ran society that the Romans rolled over during their conquest of the known world.

And that speaks to the central thesis of the book: since Carthage was so completely destroyed everything that we know of it (outside of archeological digs) comes from historical sources that are decidedly biased (the Greeks and the Romans cast Carthage as their “other,” meaning that even though for many years most of the trade in the Mediterranean involved Carthaginians they were not a well liked people).

I learned a lot of interesting things about Carthage including:

The book is a little slow to start but really picks up in the Punic War section when Rome and Carthage clash for the first time. It was incredibly interesting to see how Rome, a relative newcomer, was able to soundly defeat Carthage which was one of the superpowers of the Ancient World. It even inspired me to pitch an article comparing the Roman’s use of a specific technical innovation to basically negate Carthage’s naval advantage to the way Apple out foxed RIM (sadly the editor pitched said it was too obscure. What the hell are kids learning today if not about the Punic Wars?!).

Anyway, the book is well worth a read if you’re interested in a view of the ancient world from a different vantage point.

The other books I read in February were: