As a reader, and a person, I tend to fixate on things. I have spent days listening to the same song over and over again (one inexplicable example: A View to a Kill by Duran Duran), and countless hours watching episode after episode of TV shows.

When I stumble upon a new author (well, new to me) and find that I love his work I go a little wild. I read about the author, I follow them on Twitter, and I subscribe to their blog. Oh, and I read a bunch of their books too.

Thanks to my involvement with the Incomparable (a fine podcast filled with geeky delights) I’ve been reading all the Hugo nominated novels for the last couple of years (2011, 2012). Sometimes this makes me happy, and sometimes not so much.

The Dervish House by Ian McDonald was nominated for a Hugo in 2011, and so I knew I was going to read it. For some reason I thought it was a sequel to River of Gods, an earlier novel by the same author, so I picked that up from the library.

I was only right about one of those things (Connie Willis won the Hugo for Blackout/All Clear which were the only nominees that year I hadn’t read), but McDonald was certainly upgraded to an author whose books I buy no matter what they are about.

McDonald’s novels are complex stories intricately plotted featuring characters in non-Western cultures (generally speaking). The neat thing about setting his novels of the near future in cultures that I am not super familair with is that it transforms me, as the reader, into “the other.” I’m the one that is sort of an alien, as opposed to the characters I’m reading about in this science fiction novel.

Narrative complexity like this appeals to me, which is why I loathe Young Adult novels (YA, for those in the know). Since they’re written for a younger audience a more straightforward story is needed, which leave out all the interlocking stories that seemingly have nothing to do with each other until that beautiful moment when it all clicks into place (at least in a well written novel).

When I heard McDonald was going to start writing a YA book I was nervous because I knew I had to read it, and that my bias against the genre wouldn’t make it easy for me to like it.

That book was Planesrunner, the first in the Everness Series following the adventures of a teenage boy (what else?) as he tracks down his father through the multiverse. To sum up my thoughts of Planesrunner I offer you one word: disappointment.

The book read like a very well written episode of Sliders with a main character who is just like normal kids except he’s a math genius who can cook (which is admittedly a nice touch).

I wasn’t thrilled with it, but it was a solid book overall (though if it hadn’t been written by McDonald I never would have picked it up in the first place).

Now the second book in the series, Be My Enemy, is out and I’ve just finished reading it the other day (I finish reading series that I begin, damn it!).

Happily, Be My Enemy is a much better book than Planesrunner. I’m not sure if that is a result of my lowered expectations (as set by Planesrunner) or if this book is just better. I tend to lean towards the latter since McDonald seems to be playing with some of the very ideas that made the first book a bit cliche in interesting ways.

At one point a character says something long the lines of, “This is an alternate universe, of course there are airships.” That made me laugh out loud (LOL as the kids say).

The central premise of the series remains unchanged: our 14 year old hero Everett Singh must track down his father who has been shot into a random universe by mysterious agents of the Plenitude embodied by the main villianess Charlotte Villiers (who gives me shades of Marisa Coulter). There are 10 Earths that have discovered one another by inventing Heisenberg Gates which allow them to jump from one Universe to the next. In some universes this is a known fact, in others it is a secret.

The first book see Everett teaming up with an airship crew, and he is still with the same crew in the second book.

While the setup isn’t all that orignal (special kid goes on quest, fights adults) the concept of Alters (introduced in the first book) is explored during the course of this book to great effect.

Given there are multiple universes it stands to reason that there are multiple versions of people too. The other versions of you in other universes are known as Alters. Everett is confronted with his own Alter who has been altered (see what I did there?) by a colony of aliens who, in the Alter’s universe, live on the moon (the aliens are kind of neat, but I won’t spoil them for you). Pressed into service by Villiers and her male Alter, the Alter Everett is made into a weapon to track down Everett and get the map of the multiverse.

Alter Everett is placed on Earth 10 (our Earth) to replace real Everett at school. Everett then decides he’s going to rescue his family (well, mom and kid sister) before continuing to look for his dad. That doesn’t go well, but we get to see Alter Everett power up his internal weapon systems and blast some stuff only to be outsmarted by real Everett (just before this fight Villiers reminds Alter Everett that he is just a tool, the real Everett is the important one).

After that battle a good chunk of the action happens on Earth 1 which has been quarantined for mysterious reasons. No one can jump into the world, with the exception of Everett and his airship buddies (who have his map of the multiverse that he figured out based on his father’s work, and which the villains want) and his Alter (who gets there thanks to the moon aliens). The mystery of why this Earth was quarantined is pretty easily solved by a frequent science fiction reader, though McDonald does offer an interesting twist of a modern scifi chestnut (I’m really trying to avoid spoilers). On Earth 1 there’s some chase scenes, characters trying to figure out the obvious, and a couple of twists that I didn’t see coming.

The Alter Everett makes a critical deal towards the end of the book which will have a great impact on the third (and final?) volume in the series. I must admit I had a hard time accepting that anyone would make the deal he did (once again, avoiding spoilers) but he is a 14 year old who is being manipulated by people… so I bought it.

The writing is solid, with some glimpses of McDonald’s true talent (I get the feeling that he was holding back since this is a YA book, though one could argue he is just stretching other writerly muscles with this series). There are a couple of false notes when McDonald tries very hard to write like a 14 year old would think/talk, like this: “His body felt out the different slopes and structures an slipperinesses of the roofs. Just like a real-life version of the Assassin’s Creed video game.” But those are few and far between (thank goodness).

At this point I’m surprised to say I am looking forward to reading the next book in the series. The first book left me cold, but my interest in McDonald’s work convinced me to stick with it, and I feel like the pay off is going to be worth it.

A few words about the Kindle edition

I read the Kindle version of Be My Enemy, which is my preferred version of a new book that I don’t have any real reason to own as a keepsake (some books are just better as physical artifacts, and older books tend to be way cheaper when you buy a used copy vs. a digital copy). For some reason Pyr, McDonald’s publisher, delayed the reason of the Kindle book for 2 weeks. I have no idea why, but it was very annoying to me.

Furthermore, if you’re going to delay the Kindle book you really need to make sure the ebook formatting is spot on. I was more than 3/4 of the way through the book before I realized the chapters were numbered. The chapter number graphic was so faint as to be nigh on impossible to read on my eInk Kindle’s screen (and I have the fancy new Paperwhite). 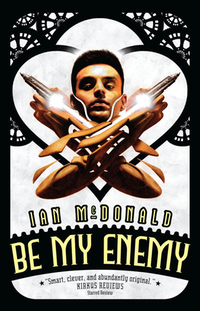 Be My Enemy by Ian McDonald

You don’t have to take my word:

Smart, clever and abundantly original, with suspense that grabs your eyeballs, this is real science fiction for all ages.

If I’m to be completely honest, Be My Enemy didn’t blow me away as completely as Planesrunner did. That’s partly because it’s, well, a sequel. A sequel to an outstanding novel, granted, but still, some familiarity sets in. The surprise factor wears off, ever so slightly.

In softer hands these books could become a “monster of the week” series but here there are consequences, none more so than when Everett is punched in the stomach by an authority figure. This basic, personal violence is a reminder that this is not a game and that even a genius can’t get through unscathed. I can’t wait to see what happens next.

In Enemy, there’s a lot more of what made Planesrunner great — tremendous action scenes, cunning escapes, genius attacks on the ways that multidimensional travel might be weaponized, horrific glimpses of shadowy powers and sinister technologies.

2 responses to “Be My Enemy”