I rarely venture forth from Center City Philadelphia, let alone the state of Pennsylaniva. However, circumstances conspired to force me to leave the Keystone state for a wedding over the weekend. As luck would have it Apple released iOS 6 with the banner Passbook feature mere days before I was to board my flight. Further proof of my luck: all four of my flights were on United, which is one of the few airlines who support Passbook at this moment (along with American Airlines and Lufthansa). How did it go?

Using Passbook isn’t difficult, but there are a lot of steps you have to take to get your eTickets into it:

There you have it, you can use Passbook to get onto your plane (and yes, the actual ticket has a QR code, which I’ve blurred out in the picture above)! 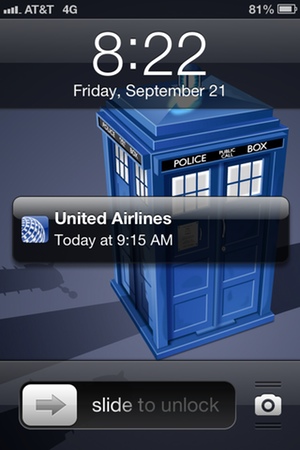 At the airport the friendly TSA folks and gate representatives all have scanners waiting for you. Just hold your iPhone, which is displaying your ticket, up to the scanner and wait for the green light that proves you aren’t a security risk (the first time I scanned my ticket the scanner turned red and beeped loudly. I slightly panicked until I realized I had an exit row seat and they had to ask me if I was OK with sitting there… which I was). And that’s it, you just used your $500 iPhone to replace a 1 cent paper ticket. Yay, technology!

It seems to me that Passbook is a clever idea, but honestly having my eTicket with the QR code emailed to me (or just using the one displayed in the United app) would have been simpler. Once you get the ticket into Passbook it is a nice experience, but adding stuff to Passbook isn’t intuitive. In fact, once I had my 2 tickets to CA in Passbook I didn’t have the option to add anything else from within Passbook itself since the App Store button was no longer displayed.

7 responses to “iPhone as plane ticket, a Passbook experience”