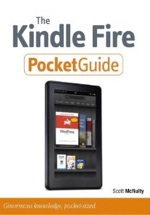 Have you been wondering what I've been up to these last few months? Shockingly, I've been writing a book. Actually, most of the book was written during a 3 week span in November with editing and tweaking done the following weeks. All that work by myself, and the fine folks at PeachPit, translates into The Kindle Fire Pocket Guide (available in paperback

[out January 22nd, but you can pre-order now] or Kindle

[You can buy it now! Heck, you can even buy it before you get your Kindle Fire from Amazon and it'll be waiting for you when you turn on your Fire]. If Barnes and Noble is your thang you can pre-order it there too.).

I think this book turned out very well, and I hope folks who purchase it find it useful.

The "war on religion"

I'm not a political guy, but Rick Perry's latest campaign ad has really got my dander up (who knew I had dander?).

I've embedded it above, but I'll post the transcript here (taken from here):

I’m not ashamed to admit that I’m a Christian, but you don’t need to be in the pew every Sunday to know there’s something wrong in this country when gays can serve openly in the military but our kids can’t openly celebrate Christmas or pray in school.

As president, I’ll end Obama’s war on religion. And I’ll fight against liberal attacks on our religious heritage.

Faith made America strong. It can make her strong again.

I’m Rick Perry and I approve this message.

I had no idea that the President (a self identified Christian) was waging a war on religion, but I figured he must have some help from the folks in Congress. What with the whole design of our government and all being set up with a system of checks and balances to prevent a crazy president from doing something like waging a war on religion.

That got me thinking, I wonder what the religions of all the people in the Congress and Senate are. Surely, given our country's continuing war on religion, both Houses must be populated with hateful non-believers.

I was shocked to find out that atheists had invaded Congress! Well, atheist. That's right, one congressmen identified himself as an atheist (Pete Stark, who is a Democrat from California… so maybe he doesn't count).

Two other members of Congress don't list an affiliation, so I suppose that could mean they're atheists but they won't come out and say it.

That leaves 432 members of Congress who self identify as being a member of one religion or another (see the full list here).

Damn those religious representatives! Maybe the war on religion is being waged in the Senate. According to Wikipedia 2 members of Senate don't list their religions. That leaves 98 who are members of one religion or another (85 Senators are some flavor of Christian).

It would seem that war on religion is failing.

I'm an atheist myself, but I'm all for protecting the rights of others to practice whatever religion they want. Who cares, as long as you aren't hurting anyone (which is how I feel about a person's sexuality as well) and you don't try too hard to convert me. I wonder if Rick Perry would be as supportive of my rights as an atheist to not say "under God" during the Pledge of Allegiance (not that I often recite the Pledge of Allegiance, though when I was growing up I said it in school every day after prayers. Yep, I went to 13 years of Catholic school).

So, to my Christian friends who must hide your religions away in the many churches, Christian charity organizations, and many Christmas displays and celebrations I offer my support. Though you are represented by an overwhelming majority in the House and Senate, I am sure it is tough. I hope you aren't suffering too much for your religion.