, and the mixed reaction from tech bloggers (Andy likes it, Glenn likes it, David not so much, Josh kind of liked it, and Marco and Ben both hated it… really hated it) got me thinking about my struggles with weight loss.

I'm a fat guy. I used to be fatter. I used to be thinner. At the moment I'm trying to get back to that thinner place. One thing I've been doing to achieve this is cutting carbs almost entirely out of my diet.

One of my favorite low carb dishes is often called 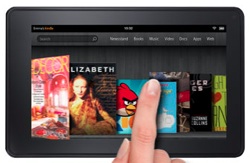 They look a like on the surface, but they are very different vegetables.

That's the way I think of the Kindle Fire vs. the iPad. If you look at it as an iPad the Fire just doesn't measure up. If you think of it as a fancy Kindle (which is what Marisa calls it) well it is pretty damned fantastic.

What do I think of it? I really like it. I haven't seen any of the super slow response times others complained about. When I tap on things they respond. Video is great on it.

I love, as always, that when I enter my Amazon account info into the Fire all my stuff is just there. It streams my 17,000 songs on my Cloud Drive without a problem, and books and magazines are fine on it (though I still hate reading on a backlit screen, which is why I also bought the Kindle Touch and the Kindle… though Marisa is getting one of those to replace her Kindle 3). The app selection isn't great, but honestly the Fire isn't about apps it is about buying and consuming stuff from Amazon.

!) so take from that what you will.