Can I call the beyond with Google Voice?

It is Father's Day here in the US, and I wish a happy day to all the dads out there that I know (A side note: the number of fathers in my social circle is increasing at an alarming rate. Clearly, I am old).

I logged into my Gmail account to see Google helpfully remind me that I should call my dad today. I would, the only trouble is that my father is dead.

I know someone at Google thought it would be a good idea to promote the phone call feature of GTalk on Father's Day but I have an inkling I'm not the only Gmail user out there with a dead dad. 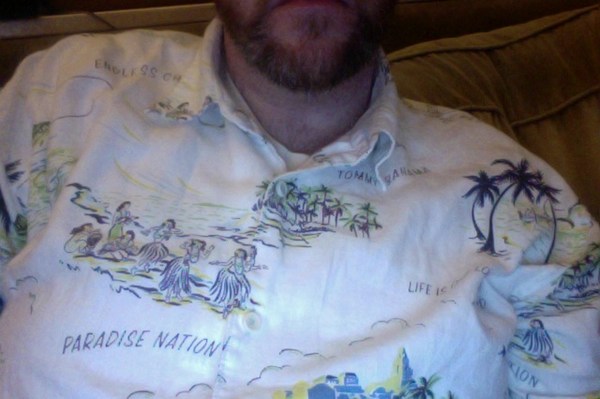 Wanna own this shirt? Of course you do! Get it here, mofo. 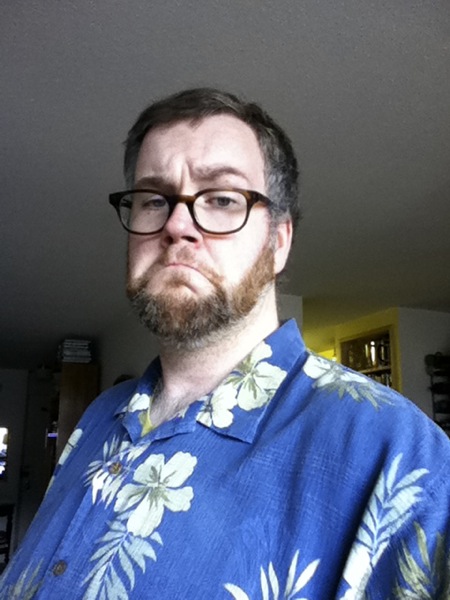 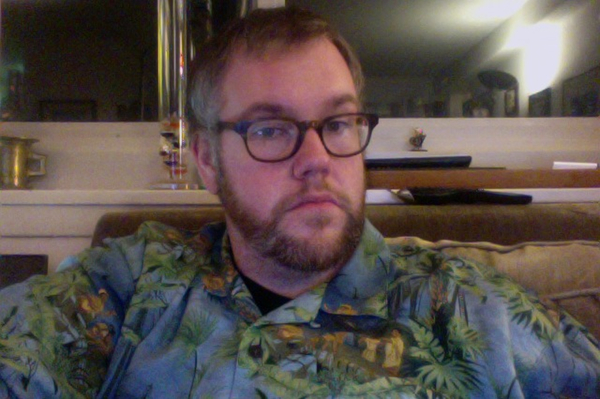 With a new Daringfireball T underneath: 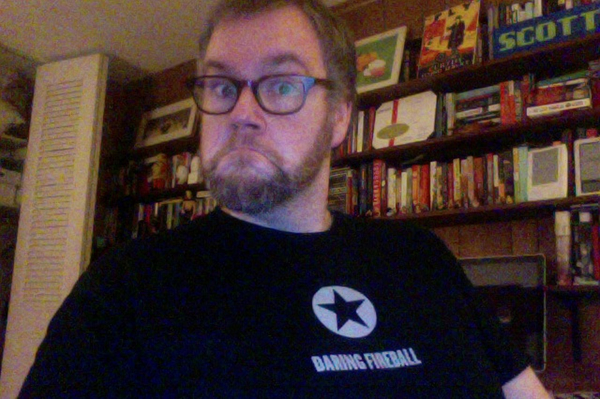 The nook has landed 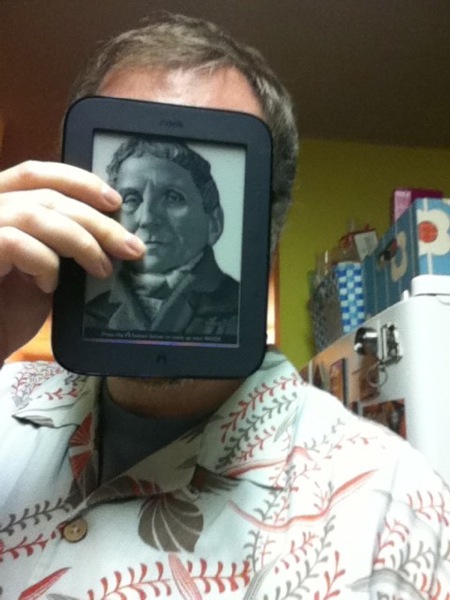 This year we broke our tradition of escaping Philadelphia to the bucolic surrounds of Lancaster County (read about our past adventures in 2010 here and 2009 here) and instead headed to Northampton, MA to visit Becky and Eric (formerly of Philadelphia).

The trip takes about 5 hours (in our sweet new car) but we decided to break the trip up into two parts by stopping over near Beacon, NY so we could visit the Dia: Beacon. 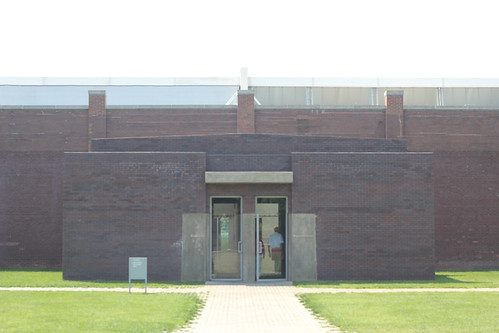 This is the entrance to the museum, and that's the only picture I could because of copyright restrictions on the art itself (who knew?).

The building is amazing, and the art is pretty mind-bending. I think the organization of the collection could use some work. As someone who isn't an expert on modern art the first two exhibits seemed like cliches (though I am sure they were very fine art). One included a room full of canvases painted white, and the other included materials that needed to be "activated." Activated, in this case, means put them on you and look foolish.

After those galleries, though, the art got really interested. Lots of great sculpture and even some crazy pencil drawings done directly on the museum's walls. If you're ever in the area you should check this museum out (though don't bring a big bag because they won't let you in with it.. as Marisa found out the hard way. Don't worry, she put it back in the car and was allowed into the museum). 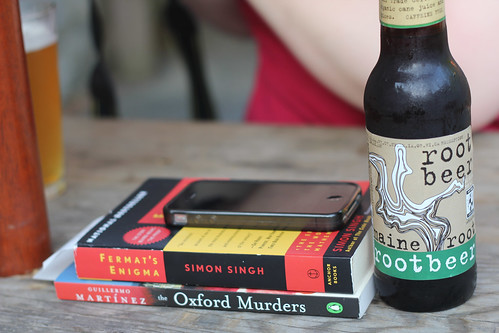 Once we were done with the Dia: Beacon we made our way to Northampton to be greeted by our generous hosts. Our first stop was the Montague Bookmill which has a great slogan, "Books you don't need in a place you can't find." I picked up some books and a bottle of root beer. 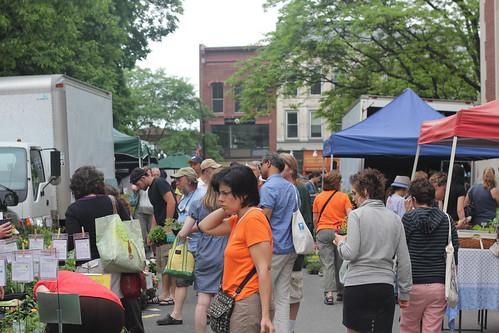 The next day found us at the Northampton Farmers Market. 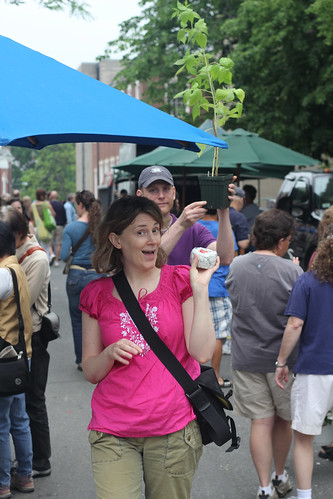 Where Becky found herself some cheese and Eric tracked down a raspberry bush. 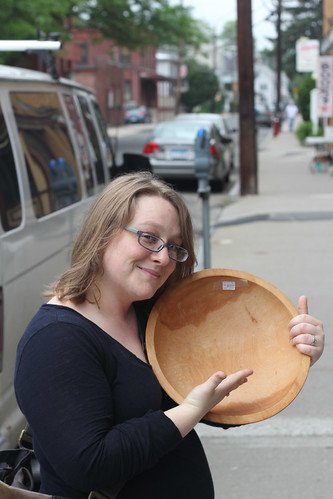 Marisa found herself a big wooden bowl because we need another bowl. 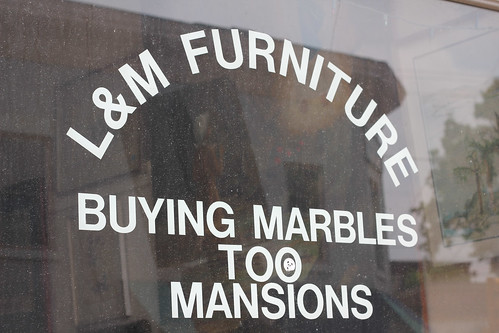 We stopped into this antique store with this rather odd phrase on the window. I still have no idea what it means. 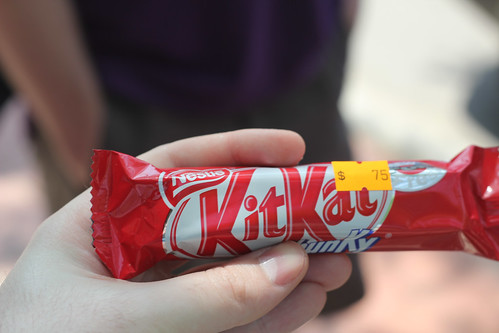 Deals and steals is a local discount organic food store (which is like heaven to Marisa). I bought this big Kitkat from Libya. 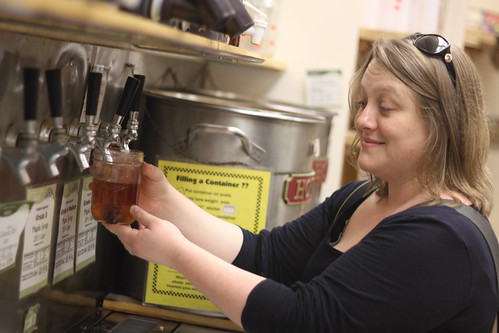 We went to a food co-op and Marisa thrilled at the chance to fill a jar with maple syrup (shortly after this picture was taken I drank all the maple syrup with a straw). 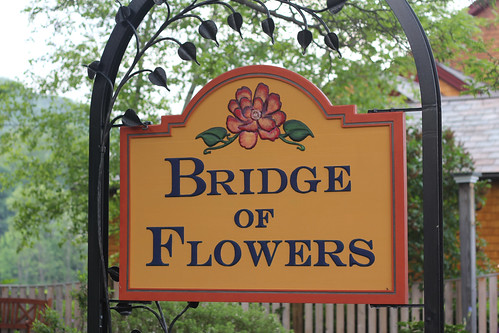 The Bridge of Flowers was… just as you might expect: a bridge with lots of flowers on it (which someone from a nearby apartment pointed out to us as we took pictures. They shouted from their porch, "They're just flowers!!"). 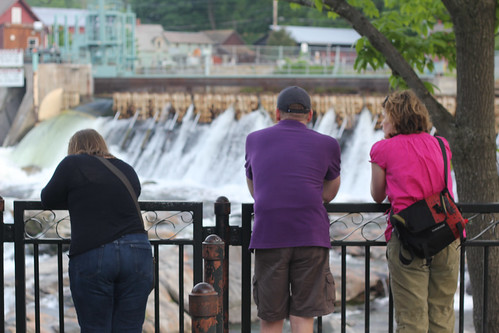 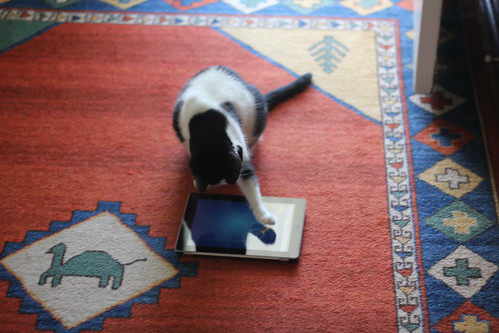 One thing I don't like about living in our apartment is the strict no pets policy. We enjoyed having some quality time with a nice kitty (and Spaetzle enjoyed playing with my iPad). 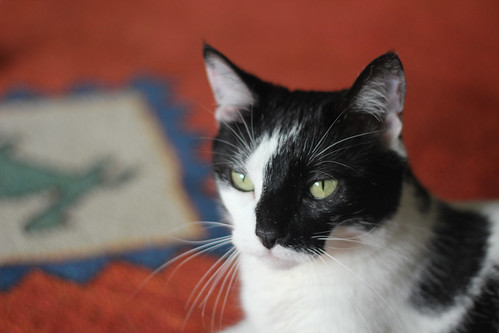 Spaetzle, caught in a rare moment of silence (she is a chatty kitty!). 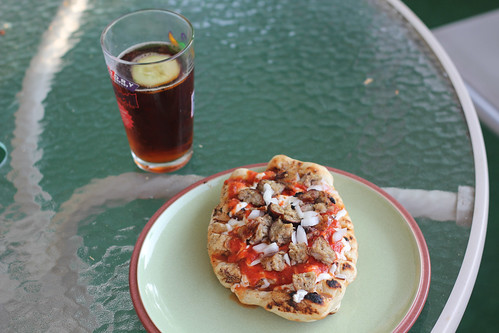 Marisa had the bright idea to grill some pizza. We all thought she was crazy, but she assured us that if we plopped some dough on the grill good things would happen. In the face of our unanimous doubt Marisa did some research and found out that one must oil the dough before placing it on the grill.

The pizza was very good. 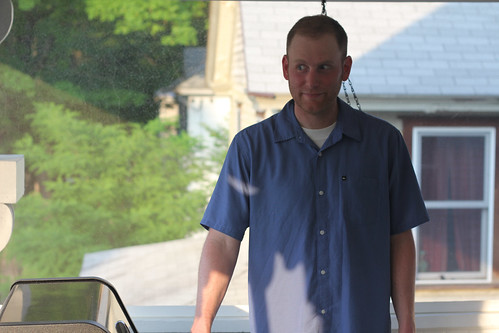 Eric is a fine grillmaster. 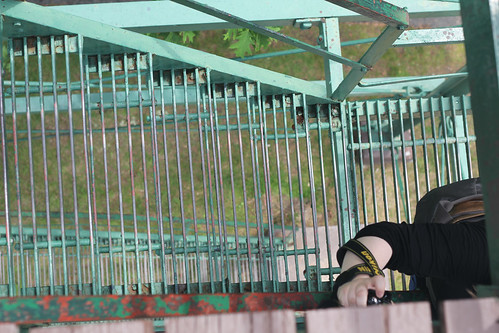 Going down the steps of Bray Tower. 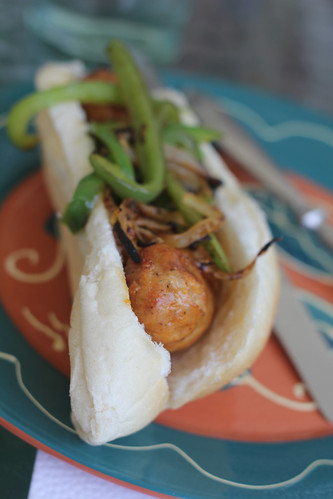 Eric commanded that we think about our ideal sausage the night before we went sausage shopping. Once at the sausage counter I met the sausage I had dreamt of without even knowing it: a chicken cheddar pepperoni sausage. It was mighty tasty. 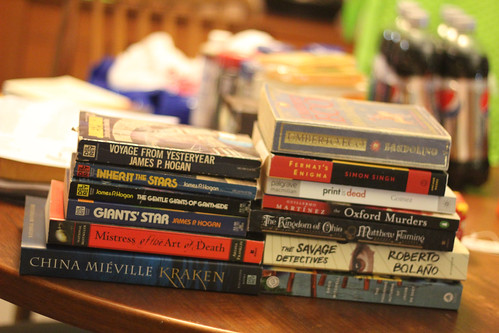 And here's my final book haul. In a rare occurrence I do believe I spent more money on this Memorial Day trip than Marisa did. Who knew?

If you video conference with yourself too much, you'll go blind 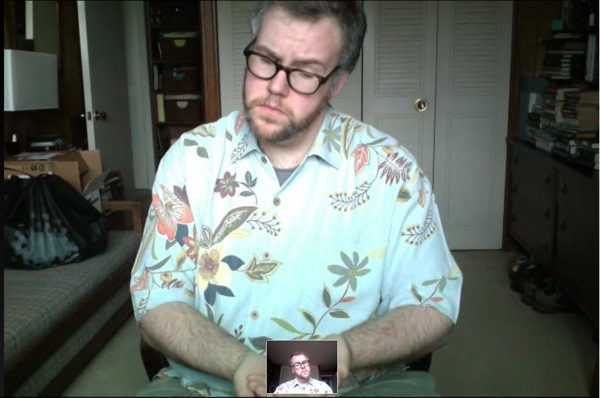 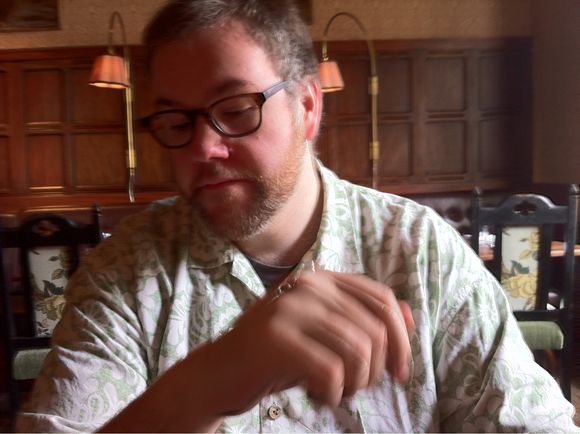 Today I had to look presentable 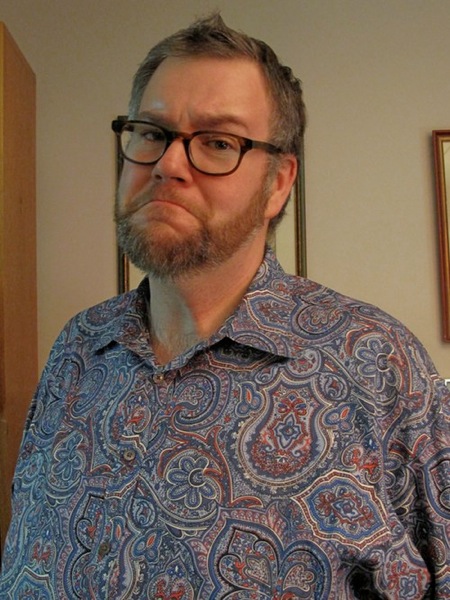 Today was a rare summer day for me: I didn't wear a Hawaiian shirt to work! We had an event today, so I had to get gussied up.

Several people said to me, "Is that the dressiest shirt you can get that still looks like a Hawaiian shirt?"

Am I that transparent? 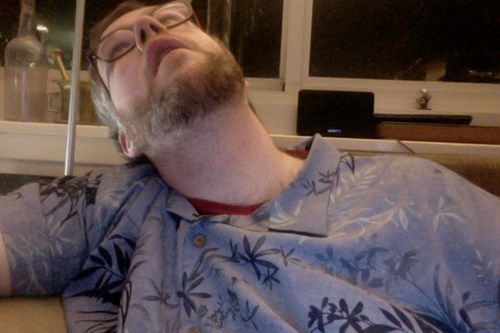 I preordered the new Nook from B&N. UPS said it was supposed to be delivered today. I did what anyone would: refreshed the UPS page over and over again until the status changed to delivered.

Sadly, the status didn't turn to delivered. It seems B&N told UPS to hand over the package to the Post Office for final delivery. Instead of getting it today, I should be getting it tomorrow. 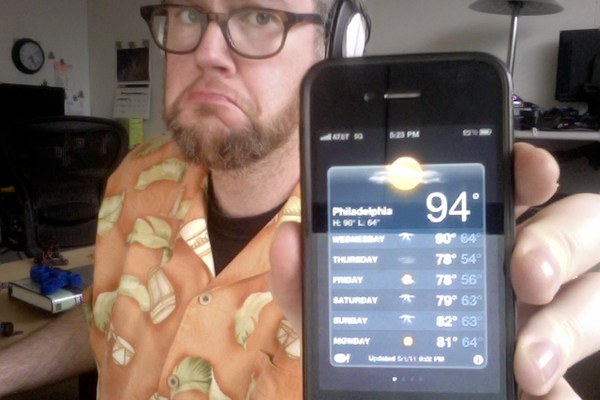