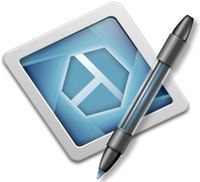 As a tech blogger, and tech author, I often have to take screenshots for a variety of reasons (for the second edition

of my WordPress book I have to re-shot each and every image… over 300 figures!). Each and every one of the images in my books, up to today, have been grabbed using Skitch (which will be undergoing a revamp shortly, I hear). However, Skitch might be finding some company on my Mac in the form of Snagit.

You PC users out there might recognize Snagit, from TechSmith the makers of Camtasia, because it has been out for Windows for awhile. The Mac version is now available, and I decided to download it and take it for a spin. 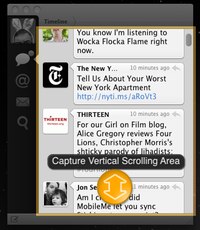 First off, Snagit isn't as lightweight as Skitch. Skitch makes taking and editing snaps super easy. Snagit includes a beefier image editor which offers more power, the price of which is complexity.

Complexity aside, Snagit has one super awesome change my life feature: Capture Vertical Scrolling area. What the hell does that mean? Often I want to take a grab of a screen that doesn't fit on my monitor. That isn't a problem during the course of computer usage because I can just scroll down (or up) and see the sections that aren't displayed.

In order to caputre the entire window I used to have to take a grab, scroll down, take another grab, open an editor, align the two images, and export it.

Capture Vertical Scrolling area takes a screen grab of the window, scrolls down and grabs another image (and so on) and then combines them all into one image automatically. Which allows you to do things like screen grab all the tweets in Tweetie with one click and produce an annoying image like this (this is an cropped version because the full image is a little over 48,000 pixels tall):

One response to “Snagit”