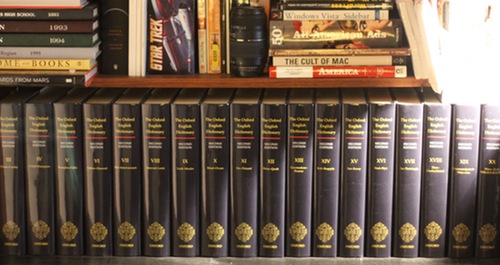 Recently Nigel Portwood, the chief executive of the Oxford University Press, caused something of a kerfuffle when he suggested that in 10 years time (when the 3rd edition of the OED might be ready for publishing) that they might not actually print a third edition.

Lots of people (many of whom, I am sure, have never actually seen let alone used the OED) decided they should pipe up and use this offhand comment as a jumping off point to pontificate about the future of publishing (which is now a hot topic amongst tech writers who know very little about the subject, but feel compelled to write about it because Apple introduced the iPad a few months ago and it is going to CHANGE EVERYTHING, i.e. they can get some cheap traffic by mentioning Apple and some other industry in the same article).

First, a little about me and the OED. I’ve long been a fan of the OED, mostly because I admire any dictionary that says, those other dictionaries define words, we define the language. The OED is less about trying to figure out what a word means and more about researching how it came to mean what it does. The OED does this through etymology (they don’t do it through entomology as I first said, though I imagine someone at the OED enjoys insects). and by quoting the first known time a word has been used to mean a particular thing in writing.

I always had it in the back of my head that I wanted to own the second Edition of the OED (which is the one that is currently in print and consists of 20 volumes plus 3 additional update volumes). I told Marisa that I wanted to buy it, and she said yes thinking it was just a plain old dictionary. When the 5 boxes from Amazon showed up she was a little taken aback, but as you can see above in the very crappy picture I took for this post they’ve found quite a nice home in our den.

Now, the OED is a fantastic set of books to leaf through… but honestly OED.com is much more useful on a day to day basis. It is more up to date, easier to search, and more convenient. Now, unless I miss my guess I think that in ten years time, when the 3rd edition of the OED is complete it will be available in print. It will just be a very expensive, limited edition print version. Something for collectors and reference sections of libraries. Most people will just subscribe to the OED’s service and have the OED app on their tablet or whatever the heck we’ll be using in ten years time.

One final note to cement the fact that most people writing about this issue, at least on the tech Web sites, don’t have a clue about the OED. Mathew Ingram writing for the usually excellent GigaOm has a piece called Oxford Dictionary Goes Online. Do You Really Care? Right off the bat the headline has two problems: the title of the tomes in question is the Oxford English Dictionary. Oxford University Press does publish a number of dictionaries, but only one is worthy of the OED monicker. The headline also creates the impression that the OED hasn’t been online up until this very point. OED.com has been online for a decade, and available on CD long before that.

Of course the headline isn’t the worst part of Ingram’s post. He ends it with this thought:

But should a major reference work like the OED go online only? It seems inevitable, but just because the dictionary publishes online doesn’t mean it has to submit completely to the real-time frenzy of the web, and try to emulate Wikipedia. The OUP could continue to update the dictionary only at certain intervals, but this job would be a whole lot easier — not to mention substantially less expensive — without the need to print dozens of books for just a single copy of the finished product.

First off, it makes no sense what-so-ever to update the online version of the OED only at certain times… why adapt the worst aspect of the print version to the online version? Good thing the OUP doesn’t do this.

Secondly, it would appear that Mr. Ingram isn’t all that familiar with the OED otherwise he would be aware that Wikipedia itself has its roots in the way the Oxford English Dictionary is created. The fine lexicographers at Oxford are very talented but they can’t research every word in the English language alone. The dictionary wouldn’t exist if there wasn’t a legion of ‘readers’ that submit quotations they believe to be the first use of a particular word in the English language. If you’re gotten this far in the post you’ll recall earlier I mentioned what set the OED apart from other dictionaries, in part, were the quotations. The OED is the great-grandfather of Wikipedia, and the Internet has only made the process more efficient (check out how you can help them find words here).

By the way, I busted out my OED to see where the word ‘kerfuffle’ comes from. Turns out kerfuffle is a colloquial version of curfuffle, which has its first known use in 1813 by George Bruce in the following sentence, “An’ Jeannie’s kirtle, aye sae neat, Gat there a sad carfuffle”

4 responses to “OED Online only? OMG.”