Existing customers can keep their old unlimited plans, but new customers will have to choose one of these two new plans starting on June 7th. Oh, and AT&T will also finally offer tethering (starting on the 7th as well) for an extra $20 a month above and beyond any data plans you might have.

For iPad users this is a little bit of a raw deal, if you ask me. The truly unlimited data plan that AT&T offered was a fantastic deal, and now not so much. However, for iPhone users I think these new plans will work out quite nicely.

I have an iPhone unlimited data plan for which I pay $30 a month. That got me to thinking, can I switch to one of the new plans and save a little money? Here’s my data usage on my iPhone for the last few months: 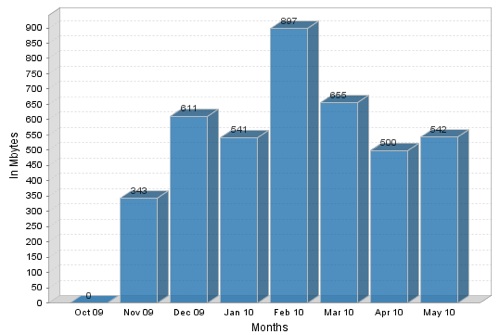 I have no idea what I was doing in February, which is the shortest month of the year, but clearly I required LOTS of data. But even than I didn’t even break a gig.

Looks like I’ll be switching to the DataPro plan to save a couple bucks.