Get a Kindle as a Christmas present? Buy my book!

You know what makes the best accompaniment to that Kindle you just got for Christmas (or whatever holiday you celebrate)? That's right, the Kindle Pocket Guide. This book is chockfull of tips, tricks, and ways to get stuff you already own onto your Kindle, and load your Kindle up with lots of free content.

Now, I know what you're thinking: "Scott, you only think this book is so great because you wrote it!" That might be true, but would I ever steer you wrong? And for only $10 what could possibly go wrong?

As a measure of good faith I'm going to share a couple of tips from the book with you in this post (for free!):

If you found a Kindle DX

(my current favorite eBook reader) under the tree you'll want to check out the Featured Books for Kindle DX section of the Kindle Store. All the books listed will work with the smaller Kindle, but the DX's bigger screen makes them shine.

Downloading books without a wireless connection

One of the whizbang features of the Kindle is that it is always connected to the cloud (that's geek for the servers that Amazon runs the Kindle Store on)... but what about when you're in a remote location and you can't get any wireless service? Are you stuck with whatever books are already loaded up on your Kindle? Nope!

If you point your browser to http://www.amazon.com/myk you'll be able to Manage Your Kindle on the web. On that webpage you have a number of options, but we're interested in the section called "Your Orders":

As you can see this lists all the eBooks that you've purchased from the Kindle store. If you click on the little plus sign (

) next to one of the books you'll see the following options:

I think you can tell where this is going now. Click on the "Download to computer" button and you can save the .AZW file that is your eBook (in this case Jasper FForde's latest novel

Once you have the .AZW saved onto your computer you need to attach your Kindle to the same computer using the included USB cable. This puts your Kindle into USB Drive mode (you can also charge your Kindle using this method). Now your computer thinks your Kindle is a removable USB drive onto which you can copy any sort of files you like. Hmm, I wonder what kind of file we should copy to the Kindle... ah, right! The .AZW you just downloaded!

Double click the new drive called 'Kindle' that appears either on your desktop or in 'My Computer' and you'll see four folders listed: Audible, Documents, Music, and System. The Documents folder is where all the, well, documents are stored on your Kindle, including books. Drag the .AZW file into the documents folder and you've just placed a new book onto your Kindle without a wireless connection (this method can also be used to add PDFs and other e-book files onto your Kindle, but remember that the Kindle can only display PDFs, AZW files (Amazon's file format), plain text files (TXT), and unprotected MOBI/PRCs.

That's all you get for free

You'll find all that information, and more, in the book. So why not buy it right now? And remember you don't need to own a Kindle to buy/read books from the Kindle store. You can read Kindle books using the Kindle app for the iPhone/iPod touch and the Kindle for PC app. 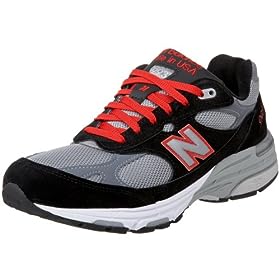 I'm a New Balance man. The only sneakers that I wear are New Balances (I started with the 991s, and then the 992's and now the 993's are the new hotness). Since I'm going to be running again (and I think come spring time I might sign up for another 5K, shocking I know) I decided that today was the day to buy a new pair of sneakers.

My current 993's aren't really good for running at this point (I assume since I'm a heavy guy the sneaker cushioning just doesn't last long with all the pounding I give it) so a new pair had to be acquired. I scoped out what City Sports had in stock and I saw the red/black pair above. I was going to nab 'em but they were $140! I was pretty sure I could find 'em for cheaper and Amazon did not let me down. $104 later, I'll have a swanky new pair of running shoes by the end of the week (Amazon Prime wasn't available for this particular pair because Amazon was selling them directly).

You need a good work out.

Loyal readers of Blankbaby will know that over the last couple of years I've had an on again, off again relationship with the gym. It is on again (and I'm shedding pounds left and right), which is a very good thing.

I'm lucky enough to have a gym that I can use both where I work (in the lovely Comcast Center in Center City Philadelphia) and where I live (also in Center City, Philadelphia). As of late I've been using the gym at home which requires me to take the elevator down to the 5th floor dressed in my gym clothes, and then back up to the 20th floor after my work-out (and I'm drenched in sweat at this point).

Yesterday I got on the elevator wearing my gym shorts and an Iconfactory t-shirt. I was happy to find the elevator empty, sadly it stopped on the 11th floor and a young person who lives in my building (which is a rarity... Marisa and I are amongst the youngsters in the building!) got on with her parents who I assume were visiting. The mother turned to me, looked me up and down and said, "Are you going to the gym?"

I thought for a moment and responded, "Yes, yes I am."

"Oh, I only ask because my daughter is trying to get them to buy new treadmills."

That is a worth endeavor, and one which I support, so I replied, "Keep up the good fight!" and got off the elevator.

40 minutes later I was done with my work-out (I generally do 35 minutes on the elliptical and I'm slowly adding on some treadmill time... 5 minutes is my starting point and I'll work my way back to were I was several months ago) and I was dripping with sweat (as a fat man should be after he works out).

I pressed the up button so I could get home and hop in the shower. The elevator arrives and two little old ladies are standing there. I nod to them and get on.

After a moment one of the little old ladies turns to me and says, "Did you have a good workout?"

She smiled and looked away. That's when I noticed the other little old lady was giving me the once over. It looked like she wanted to say something to me, and sure enough she did.

This is, of course, the truth and yet I have been working under the assumption that we, as people, operate with a certain social contract. When you see an ugly person you don't go up to them and say, "Geez, what's up with your ugly face?" and then you're riding the elevator with a fat guy (like, oh, say me) who is covered in sweat you don't point out that he needs to work out. It is assumed that the sweaty fat guy, who JUST WORKED OUT, knows that he needs to continue working out.

Now little old lady number two was staring at me, waiting for a reply. I quickly glanced up and saw we were at the 14th floor. Too many floors to go without responding... but what could I do? The first thing I thought of saying was, "You need to shut up!" but I rejected that.

I ended up saying the only thing that I could. I chuckled and said, "That's true!" and spent the rest of the elevator ride avoiding eye contact with either of them.

Is it any wonder that I'm a hermit?

Who says I have an eReader problem?

I can stop buying them at any time, honest!

Here they are, starting with the silver one in front:

Clearly, I really like eBook readers... and I'll never recoup all the money I've spent on them but life is too short NOT to have 5 eBook readers (we actually have 6 in the house since Marisa has a Kindle 2 of her own).