I just posted a new episode of Fork You: Fork Off 1: Phillies Cupcakes.

Marisa and I try three different Phillies themed cupcakes and crown a winner. Check it out! 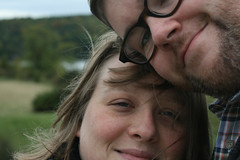 A honeymoon in food

As we sat down to our first real meal of the honeymoon I thought it would be a great idea to snap an iPhone picture of each meal I ate during the trip. I always have my iPhone with me, and I'm always taking crappy pictures of my food with it so clearly this idea was meant to be.

I'm not sure who thought putting the insides of a chicken pot pie into a bread bowl was a good idea, but they were absolutely correct. This was our first real meal of the honeymoon and we had it at the Perfect Wife. Very good, and the prices were reasonable.

One of the great things about staying at a bed and breakfast is that you get both a bed AND breakfast (genius!). We were the only guests at breakfast our first morning, so I couldn't refuse the big bowl of fruit (not a fan of fruit). I covered it up with yogurt and only ate the cantaloupe.

After the disappointing fruit (which was only disappointing because I don't like fruit, mind you) the good innkeeper at The Inn on the Covered Bridge Green made up for it with some delicious eggs benedict.

Our lunch stop was the Blue Benn Diner. If you're ever in Bennington, VT you have got to stop at this tiny diner (it is one of those dinners in a train car). The hot chocolate was great, as was the...

Eggplant thing that I got. I asked the waitress what she would recommend, since the menu is huge, and she said the stuffed eggplant was the way to go. She didn't steer me wrong.

Not having enough colonial experiences in Philadelphia we decided to have dinner at Ye Olde Tavern. The pictures aren't great because that place is dark. I mean, seriously dark. These were some cranberry fritters that we got whilst waiting for our meal. Pretty good.

The cheese plate was the highlight of the meal for both Marisa and myself.

I ordered the tournedos of filet mignon, which is filet mignon topped with lobster served with béarnaise. It wasn't bad, but it wasn't mind blowing either.

This was our last breakfast at the good old Inn on the Covered Bridge Green and it consisted of lemon and blueberry pancakes. They were good, sadly I had a childhood trauma involving blueberry pancakes (watch me tell the story of my trauma and eat some blueberry jam!) so I didn't really enjoy them (though I soaked them through and through with maple syrup, which seemed to help). The bacon was very good.

We spent a lot of time in random stores during the honeymoon and the Vermont Country Store has got to be the most random of them all. However, the Bryant House Restaurant that is next to their location in Weston, Vermont is very good. I had the Yankee Pot Roast open face sandwich. I wish they could FedEx one to me tomorrow. Very tasty.

I thought the Mountain Top Inn and Resort was a little more rustic and secluded than it actually was, but they make a mean french dip!

Maple Sugar and Vermont Spice makes the best pancakes I have ever had in my life. Above you see an order of their sugar and spice pancakes. After we finished our breakfast I turned to Marisa and said, "We have to have breakfast here again tomorrow." Read on to see if we did! (Spoiler alert: we did, and it was just as good).

We somehow found ourselves in New Hampshire where we saw Fame (don't ask). I was craving some Asian food so we stopped at Yama II. This soup was tasty but super hot.

The pad thai was very good, indeed. The place really had a 'college town eatery' vibe that I dug.

I told you we went back! This time I had the breakfast sampler with pancakes, two eggs, two pieces of bacon, and two sausage links. And a maple syrup chaser.

Kanu is the restaurant inside the Whiteface Lodge, and it is very good. Not pictured were two appetizers that we shared: a mac and cheese to die for and some very good grilled scallops. My entree was the pulled pork which was porktastic. Sadly, the baked beans weren't cooked all the way through so I didn't eat them. The cornbread was good though.

Breakfast was included in our rate at the Whiteface Lodge, so you can bet your bippy that we had breakfast there. Best of all it was a breakfast buffet (and a very good one at that). I must have eaten seven of those cinnamon roll things.

At this point Marisa decided that we hadn't been eating enough vegetables ("Wait, bacon ISN'T a vegetable?!") so we had some raw veggies and hummus for lunch.

Milano North is responsible for this, and it was much better tasting than it looks in this picture (it kind of looks like gagh, which you might know as Klingon Blood Worms). Marisa wasn't a fan of her dinner, but they did give us a free dessert (which I devoured before my iPhone could snap a pic).

I did not have high hopes for Brios, but my chicken parm was very good. There were a few too many screaming children here for my taste, but that isn't the restaurant's fault.

When we saw that the menu featured four different types of multigrain pancakes we knew we had found the right place for Marisa (damn, hippy). The omelet was very good, and the toast was fantastic (they bake their own bread). Sweet Sue's is worth a stop if you ever find yourself in Phoenicia, NY. 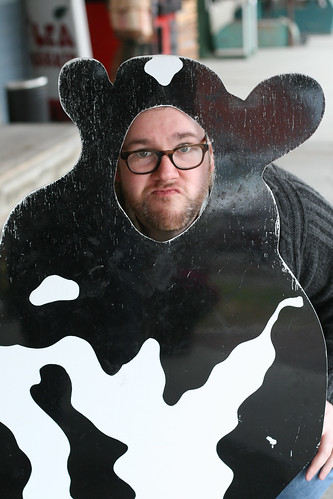 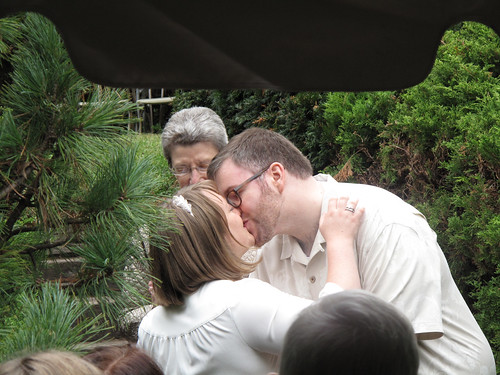 I don't think I mentioned this on the blog before, but two week ago I got married to Marisa (who knew?).

Marisa thoughtfully posted our vows, if you want to check them out.

Yes, I wore a Hawaiian shirt at the wedding. Marisa has some pictures here and I have some here (thanks for taking most of the pictures with my camera, David!). We'll be posting some more shortly.

I'll level with you, I was pretty sure my first book was a fluke. I mean, really, who wants to read a book I wrote? Well, it would seem more than a few people bought my WordPress book (I just got my second royalty statement which included a nice check, which is pretty darned good since most folks don't earn back their advance) so maybe I know a thing or two about writing them thar books.

I've not been shy expressing my love of Amazon's Kindle 2

. I really think that Kindle, for the moment, is the best eBook reader money can buy (the Sony Reader looks nicer, but getting a book onto the damned thing sucks). That's why Cliff, my editor at PeachPit Press, thought of me when they wanted a book about the Kindle.

I found out that my Kindle book, The Kindle Pocket Guide, was available for purchase on September 26th. I was a little busy getting married at the time, and then I was off on honeymoon, and so I am just getting a chance to write about it.

This book is interesting in that it is only available as an eBook (I know this was a risk, but I thought it was appropriate) so we'll see how many people out there with Kindles are interested in learning some tips and tricks about the device (both the Kindle 2 and the Kindle DX are covered... Amazon was nice enough to announce the DX while I was in the midst of finishing up the first draft of the book, so that was fun updating it!).

If you have a Kindle (or the Kindle iPhone app!), want to know a little bit more about it, and like my writing style you should download a copy.

Oh, and since my mom (hi, mom!) won't be buying this book any time soon here is a screenshot of the dedication: