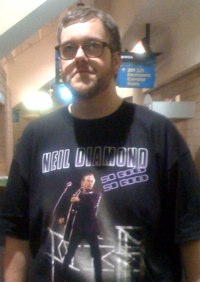 Or how I became ‘that guy’

As you might recall, Marisa and I went to a Neil Diamond concert on Sunday. Through the magic of technology I was able to file a report live from the concert itself showing off my swanky new t-shirt. That post inspired both Geoff and Glenn to opine that I shouldn’t be ‘that guy,’ you know… the guy that wears the t-shirt of the band to said band’s concert.

There is one big assumption in that line of thinking though: that I wore said Neil Diamond t-shirt to the concert (which also assumes that I owned that shirt before the concert). Now, I’m a fan of Neil Diamond, I’m not ashamed to admit that. His music is catchy, upbeat, and entertaining. He enjoys being himself (no matter how schlocky or uncool his persona might be, which has had the effect of making him kind of cool once more. I like to call this the ‘Shatner effect’). All of this is to say that Mr. Diamond is aces in my book. However, I never felt the need to own a Neil Diamond t-shirt and didn’t own one before that fateful Sunday.

How then, you wonder, did I end up wearing a Neil Diamond t-shirt at his concert? I’ll tell you:

Marisa and I are two very different people. I’m a bit neurotic about being on time and feel the need to leave for various events (movies, concerts, flights) several hours early. Marisa doesn’t mind being a little late so she tends to leave later than I would like (a lot later, actually). Since this concert was my idea (though Marisa made it possible) we left when I wanted to leave (that’s how we handle our incompatible time tables: if we are doing something that Marisa planned we leave when she wants, and if is something I planned we leave when I want to). That meant that we had to hurry out of the apartment (evidence to this fact: Marisa wore two different shoes). While we were leaving we noticed there was some light rain so we brought along Marisa’s tiny umbrella.

We hopped onto public transit (because we’re cool like that) and emerged to find that the area of Philadelphia in which the stadiums are situated, and in which the concert was being held, was being buffeted by some sort of monsoon. Rain, rain, and more rain was everywhere. We waited for a bit in hopes that the rain would slacken (we were 30 minutes early thanks to my mania) and we dashed out when it looked like the rain was letting up. As we walked across a large parking lot, huddled under a tiny cocktail umbrella, the skies opened up. Half of my Hawaiian shirt (washable silk, luckily) was soaked, as was my t-shirt underneath. Marisa also got a little damp, but thankfully she was better shielded than I.

We arrived at the concert venue (the Wachovia Center, for those in the know) and I had a choice to make as Marisa used the lady’s room: I could sit through the whole concert wearing a very wet shirt and not have any fun or I could buy a new shirt. Luckily, when you’re at a concert there are plenty of shirts to be had that are both concert appropriate and dry! I headed over to the t-shirt hut and looked at the offerings. I thought the ‘So good. So good.’ shirt was hilarious and my choice was made (though really, I think the t-shirt should say ‘So good.’ three times, but who am I to tell the Diamond people how to make their t-shirts). $35 later I was wearing a dry shirt, and letting the world know that Neil Diamond is, in fact, so good, so good.

I hope this clears up the matter of the t-shirt, and that this incident hasn’t caused anyone undue stress.

How was the concert?

The concert itself was a hoot. Marisa had snagged some free tickets that happened to be in the last row of the upper deck. We were pretty far from the stage, but I figured you only really need to hear the music, and they had large screens set up so I wasn’t concerned. The place wasn’t sold out (though the concert on Saturday was) so there were lots of empty seat around us, which was nice too.

A few minutes before the concert was about to start some dude walked up to Marisa and myself and asked me, ‘Is it just you two?’ I said, ‘umm.. yes.’ and he said, ‘Well, today’s your lucky day!’ And he handed us two tickets for seats in the 7th row of a section right off the side of the stage! It was pretty darned cool, and we had a great view (and you can’t beat the price).

Marisa had fun too, though she told me that she didn’t really get the rabid fanbase that Neil Diamond has. Oh, the unbelievers.

I did feel a little sorry for Neil Diamond though. Sure, he gets to sing his songs in front of lots of people and make a good living doing it which is great. That being said you go to a Neil Diamond concert wanting to hear songs that he wrote, and sang, for the first time 30 years ago. I am sure he’s aware of this, and the concert was full of all the hits you would expect (and they sounded very good) but I got the sense that he enjoyed playing his new material more (though the crowd certainly didn’t enjoy his new stuff as much as say… ‘Cherry, Cherry’).

I actually like his new album, and I enjoyed the 3 songs he played off of it… but I can’t deny that the highlight of the evening was Sweet Caroline (which you haven’t heard until you’ve heard it in a big stadium with 10,000 people singing along).