So that's where all the Wawas went

I am in VA visiting my mom and we stopped into a brand new Super Wawa. This is the first Wawa I have ever seen in Virginia.

My first piece for a magazine

Earlier this year I tweeted about one of my goals for the year: writing something for a print publication. Luckily for me, one of my Twitter follower is Jason Snell, who is a big mucky muck over at Macworld. Macworld, if you aren't a Mac geek, is the leading Mac news publication in the world. For some reason Jason thought that some opportunity for me might popup at Macworld.

Months past and I had forgotten about wanting to write for a magazine when I was contacted by one of the senior Review editors to write some reviews of antivirus software for the Mac. I knew AV reviews would be a tough sell, but I didn't think my NAV 11 review would end up being the most loathed article on Macworld.com (and by a long shot!). This doesn't seem to bode well for future Macworld writing assignments.

At least the folks at Macworld seemed to like my writing.

I have been slacking off in many areas of my life:

As you can see from the video above, I'm working on the Fork You bit. That's right, Chili Today is up and ready for your viewing pleasure (that leaves only about 5 more Fork You episodes that we have filmed that I need to edit!). Watch as we make that summery treat: chili.

via SenorDanimal (who has promised to sneak me into Pixar at some point in the future).

This is what happens when 4 geeks vacation together 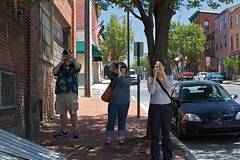 *sigh* My Friends
Originally uploaded by Contrabass.
Thad snapped this picture of his lovely bride, Marisa, and myself snapping pictures of this sign.

Maura asked for it 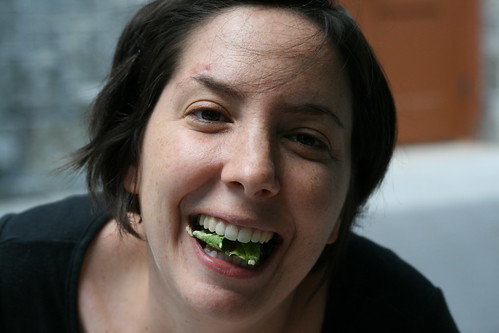 I had lunch today with Maura and Jessie and I happened to take my camera with me. Maura told me to take the picture above and blog it. Maura, your wish is my command.