Hurrah! A new series on Blankbaby! That's right, folks, I plan on actually POSTING to Blankbaby once again (who is excited?).

This new series was inspired by Terry. He stopped by my desk after I tweeted about the MacBook Air and said, "I'm going to ask your opinion about what everyone must be asking you about: Cherry Chocolate Diet Dr. Pepper."

Terry, being the scamp that he is, knew that no one had asked me about said bubbly beverage, but that I would be intrigued. Ever since swearing off sweet, sweet Pepsi I have been a Diet Cherry Vanilla Dr. Pepper drinker. I frickin' love the stuff, which is sad because it isn't as widely available as I would like (what's up with that, bottlers and distributors of Dr. Pepper?). It would follow that Cherry Chocolate Diet Dr. Pepper would pique my interest. Terry waskind enough to give me a can from the 3 cases that he bought (without tasting the stuff first, I might add). Terry seemed to be enjoying it, but one must note that Terry is a fan of the vile Diet Berries & Cream Dr. Pepper, so his opinion is suspect.

Terry supplied me with a can of this stuff, as seen to the right. As you can see both on bottles and cans of this stuff the image of cherries semi-coated with chocolate are displayed prominently. I don't care for this one bit, mostly because the image of a red orb dripping with some

sort of brown liquid doesn't scream, 'DRINK ME!' It mostly says, 'potential biohazard,' to me.

Contrast this with the branding for Diet Cherry Vanilla Dr. Pepper as seen here. The cherries, though you can hardly make them out in this picture, look like heathy cherries and the pin-striping calls to mind a soda shop from yesteryear. Who wouldn't want to quaff a heaping mouthful of anything in that can?

Cherry Chocolate Diet Dr. Pepper could learn a thing or two from Diet Cherry Vanilla Dr. Pepper's packaging, though the addition of the pin-wheel burst is a nice touch but it still doesn't work as well as the pin-striping.

I was skeptical, at best, when I first heard of this beverage. I'm not a huge fan of chocolate to begin with (I like it just fine, but I do not go ga-ga for it like some people) so I was doubtful that Chocolate Cherry Dr. Pepper would unseat Diet Cherry Vanilla Dr. Pepper as the king of my diet soda drinking. I was afraid that the chocolate would be overpowering, and just kill the rest of the soda. I'm happy to report that the chocolate isn't overpowering at all. There is, what can only be described as a 'ribbon' of chocolaty taste in this beverage which does not offend the taste-buds at all.

Before all you chocolohics rush out to buy 45 cases of this stuff let me point out that while I could easily identify the taste as chocolaty it isn't a pure chocolate taste. At first I was reminded of Yoo-hoo but then Terry set me straight: it sort of tastes like you're drinking a chocolate Tootsie-Pop. I like chocolate Tootsie-Pops, but Godiva they ain't.

Did I like it? Chocolate Cherry Diet Dr. Pepper isn't bad, and is a fine once in awhile beverage. It isn't the beverage I would reach for first to quench my thirst, and furthermore if I see it for sale I won't buy it for myself.

I applaud the fine people at Dr. Pepper for being inventive with their products. It is tough to keep something that has been around for as long as Dr. Pepper has been interesting, and they are doing a great job. I still love Diet Cherry Vanilla Dr. Pepper, but I am always willing to give their newest additions a fair shake. Chocolate Cherry Diet Dr. Pepper is drinkable, which is more than I can say for the vile Berries & Cream Dr. Pepper, so at least progress is being made. I, for one, look forward to a brave new Dr. Pepper future. 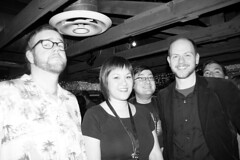 The Big Three
Originally uploaded by dmoren.
All the Mac blogger awesomeness in that room was a little overwhelming, if you ask me.

That's right, the heads of TUAW, Infinite Loop, and MacUser all in one place at one time. They said it couldn't be done! They say it SHOULDN'T be done! Oh, but it was done.. and not too much really happened (other than we all had a good time and drank on the Macworld tab). 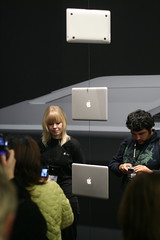 You may have noticed that all has been quiet here at Blankbaby for the last week or so. That's because I found myself, once more, on the West Coast attending yet another Macworld (this marks my 4th Macworld). Apple announced some stuff (I'm not getting a MacBook Air, but I did buy a Time Capsule for those who are interested) and I met a great many people.

This Macworld was the best Macworld I have been to for both myself, and TUAW. We covered the heck out of the show, did some great videos (some of which I'll share below), and I had a chance to meet some TUAWers that heretofore were merely words on a screen to me.

In addition to all the TUAW goodness I got to see some fine Mac web folks that I have come to respect over the years, as well as meet some people whose work I admire. Thanks to the magic of Twitter I was finally able to meet both Jason Snell and Andy Ihnatko (Andy told me I am much slimmer than my Twitter icon made me out to me. I bet he says that to all the bloggers!). I even ran into, and interviewed, web maven Merlin Mann.

Overall Macworld 2008 reminded me that Mac folks are some of the best, and shortest, people out there. I mean really, people, it was tough for Chris to try and frame some of these interviews since I am seemingly a giant amongst the Mac people. What up with that?

Walt Mossberg (who runs away at the end of the interview):

The always entertaining Merlin Mann (some have said Merlin and I should have our own show. What do you say, Merlin?):

The ever knowledgeable Chris Breen:

I'm too cool to blog 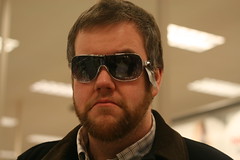 Eeeeevil! I have 666 followers on Twitter at the moment. What does it all mean? Probably nothing.

Fork You live is... well, live

My mom called me today and asked, 'Where the heck is this Fork You live video you blogged about?' Since I'm a good son I will give my mom what she wants! I actually posted this video over at Fork You on Friday, but I know not everyone subscribes to all my blogs (what is wrong with you people?!).

The turn out was fantastic, and Foster's was very happy with us (we even got to meet Ken Foster, which was cool. He's the dude that owns the place!). There will be more episodes of Fork You filmed there, which is awesome.

We also had a great meeting with a number of folks who are interested in helping us out with Fork You, so expect that quality of our episodes to improve (I'm an OK editor but really I have very little idea what the hell I'm doing).

This is all very exciting! Maybe we'll even make money on this thing or something.

I found myself lunching at a local Chinese eatery near my work this afternoon, which is always a good time. As the meal was winding down the fortune cookies were passed around and I cracked mine open. The picture above is what was waiting for me in the cookie. 'You look pretty.' So very, very true. How did the cookie know?

Breaking news: Clinton and McCain to make out!

This picture was taken just moments before John McCain and Hillary Clinton started to passionately kiss. Pollsters on both sides of the aisle are not sure how this will impact their candidate's campaigns. More news as the story develops.

Just a friendly reminder that Marisa, myself, and the whole Fork You crew will be forking it up at Fosters Urban Homeware tomorrow, Jan. 5th, at 2pm. We'll be creating some delicious salads and acting silly. You'll laugh, you'll cry, you might even learn something.

Feel free to RSVP here, or just show up!