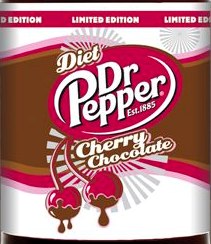 Hurrah! A new series on Blankbaby! That’s right, folks, I plan on actually POSTING to Blankbaby once again (who is excited?).

This new series was inspired by Terry. He stopped by my desk after I tweeted about the MacBook Air and said, “I’m going to ask your opinion about what everyone must be asking you about: Cherry Chocolate Diet Dr. Pepper.”

Terry, being the scamp that he is, knew that no one had asked me about said bubbly beverage, but that I would be intrigued. Ever since swearing off sweet, sweet Pepsi I have been a Diet Cherry Vanilla Dr. Pepper drinker. I frickin’ love the stuff, which is sad because it isn’t as widely available as I would like (what’s up with that, bottlers and distributors of Dr. Pepper?). It would follow that Cherry Chocolate Diet Dr. Pepper would pique my interest. Terry waskind enough to give me a can from the 3 cases that he bought (without tasting the stuff first, I might add). Terry seemed to be enjoying it, but one must note that Terry is a fan of the vile Diet Berries & Cream Dr. Pepper, so his opinion is suspect.

Terry supplied me with a can of this stuff, as seen to the right. As you can see both on bottles and cans of this stuff the image of cherries semi-coated with chocolate are displayed prominently. I don’t care for this one bit, mostly because the image of a red orb dripping with some

sort of brown liquid doesn’t scream, ‘DRINK ME!’ It mostly says, ‘potential biohazard,’ to me.

Contrast this with the branding for Diet Cherry Vanilla Dr. Pepper as seen here. The cherries, though you can hardly make them out in this picture, look like heathy cherries and the pin-striping calls to mind a soda shop from yesteryear. Who wouldn’t want to quaff a heaping mouthful of anything in that can?

Cherry Chocolate Diet Dr. Pepper could learn a thing or two from Diet Cherry Vanilla Dr. Pepper’s packaging, though the addition of the pin-wheel burst is a nice touch but it still doesn’t work as well as the pin-striping.

I was skeptical, at best, when I first heard of this beverage. I’m not a huge fan of chocolate to begin with (I like it just fine, but I do not go ga-ga for it like some people) so I was doubtful that Chocolate Cherry Dr. Pepper would unseat Diet Cherry Vanilla Dr. Pepper as the king of my diet soda drinking. I was afraid that the chocolate would be overpowering, and just kill the rest of the soda. I’m happy to report that the chocolate isn’t overpowering at all. There is, what can only be described as a ‘ribbon’ of chocolaty taste in this beverage which does not offend the taste-buds at all.

Before all you chocolohics rush out to buy 45 cases of this stuff let me point out that while I could easily identify the taste as chocolaty it isn’t a pure chocolate taste. At first I was reminded of Yoo-hoo but then Terry set me straight: it sort of tastes like you’re drinking a chocolate Tootsie-Pop. I like chocolate Tootsie-Pops, but Godiva they ain’t.

Did I like it? Chocolate Cherry Diet Dr. Pepper isn’t bad, and is a fine once in awhile beverage. It isn’t the beverage I would reach for first to quench my thirst, and furthermore if I see it for sale I won’t buy it for myself.

I applaud the fine people at Dr. Pepper for being inventive with their products. It is tough to keep something that has been around for as long as Dr. Pepper has been interesting, and they are doing a great job. I still love Diet Cherry Vanilla Dr. Pepper, but I am always willing to give their newest additions a fair shake. Chocolate Cherry Diet Dr. Pepper is drinkable, which is more than I can say for the vile Berries & Cream Dr. Pepper, so at least progress is being made. I, for one, look forward to a brave new Dr. Pepper future.