Blogging Heroes: there must have been some kind of mixup 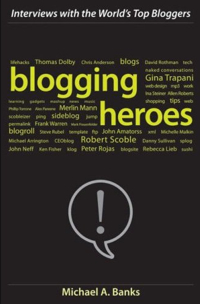 Anyone who has known me for any length of time can tell you I’m crazy about blogging. I’ve been blogging for a little over 7 years now, and I am sure that 7 years from now I’ll still be blogging (and I bet I’ll still be doing it right here at Blankbaby).

A few months ago I got an email from Michael A. Banks. He was doing a book about blogging, and he wanted to talk to me (thanks to my TUAW blogging duties). Never the one to turn down talking about two of my favorite subjects (myself and blogging) I gave Michael my details. He called me one Sunday afternoon, as I recall, and we spoke about blogging for awhile. I also took the chance to ask him about writing for ‘Old Media,’ i.e. in print. He gave me some things to think about, and I hoped I had given him something with which he could include in his book.

His book is called Blogging Heroes, and I am one of 30 interviews with the ‘World’s Top Bloggers’ that make up the book (my interview is chapter 19) along side such bloggers as Steve Garfield, Robert Scoble, Gina Trapani, and Steve Rubel (to name only a few). If you want to read my interview Wiley said I could post it on my blog, so here is the PDF. I don’t really say anything that should come as a shock to anyone. I only have two rules that are keys to success in blogging (or in anything, really):

Nothing earth-shattering there, but I said it with my rapier like wit. Plus, I’m a blogging hero so that means I am better than you are (but you knew that already).

12 responses to “Blogging Heroes: there must have been some kind of mixup”