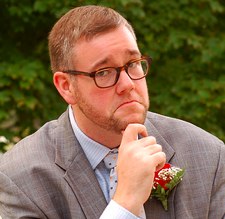 It is always a nice feeling when you know that someone you care about is very happy. You know the feeling, don’t you? A sort of warm, squiggly feeling deep inside of you that let’s you know the world isn’t half bad.
It is not unusual for someone to feel this way at a wedding of a dear friend, and I am happy to report that is just how I felt this past Friday. However, this feeling was amplified because two good friends were getting married… to each other and I can take at some of the credit for it.
Thad and Angie (if those are their REAL names) got hitched this past weekend after a 2 year courtship (or there abouts) and I introduced them to one another! Such is the mighty power of the Blankbaby, I tells you!
Remember, ladies, I’m still single and I am very fashionable as evidenced by the above picture.
Anyone who has encountered Thad and Angie (or Thadgelica as some have called them) over the past year or so could tell that these two wacky kids were meant to be together. I’m just happy they let me participate in their happy day (I was an usher, and I must say that I ush with the best of ’em).
The ceremony itself was very nice, though the priest’s homily was a little creepy. He managed to bring up pedophilia and having a threesome with Christ in the same homily. It was most impressive. I also nearly managed to make Marisa laugh out loud during the ceremony, which would have been hilarious (to me at least).
Other highlights of the evening include:

A good time was had by all, and here are my pictures, Roz’s pictures, and Marisa’s pictures to prove it.

7 responses to “I’m available for weddings”