No Fork You today, but check out the latest Slashfood in the Kitchen

Today's Fork You has been delayed because I didn't feel like editing it last night, and I am working late tonight, however, that doesn't mean you can't get a hit of Scott and Marisa today. Check out our latest episode of Slashfood in the Kitchen. We pick some apples and then make apple sauce and an apple crisp.

Oh, and as a special treat for Blankbaby readers here is the episode in glorious QuickTime (it looks much better than it does on the AOL player).

And can I just say that Slashfood commenters are much nicer than TUAW commenters (though neither can hold a candle to you, Dear Blankbaby readers).

How I feel right about now 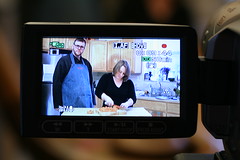 Another day, another Fork You filming. Marisa, myself, and our intrepid crew gathered today in a small house located somewhere in South Philly to film not one, but three episodes of Fork You. That's right, we had Thanksgiving in October to prepare for 3 weeks of Thanksgiving madness over at Fork You (and we'll be filming one more episode this week dealing with leftovers to round out the month of November).

Thad manned my camera and took a bunch of pictures which are viewable in this set at Flickr. We have so much fun filming Fork You, it is no wonder we keep doing it despite the fact that it takes lots of time, and a good bit of money, to put together.

We made a ton of food, and so the call went out over Twitter for hungry people. Roz, Bart, Bart's sister, Ruth, and Annie heeded the call. Lots of food, and lots of laughs later, the Fork You filming was done.

I'm not really political, but this quote that the Clinton campaign gave CNN is pretty darned funny:

Reached by telephone phone later in the day, Clinton campaign spokesman, Mo Elleithee said: 'Given Governor Romney's long history of flip floppping on issues, we're not worried. We expect him to endorse us any day.'

Happiness in a bun

Somehow, without knowing it, I became something of a food blogger. I became aware of this when I was included on an email about the upcoming Philadelphia Food Blogger Meetup and Potluck. Who knew?

I'll be going, because I like free food and I like bloggers. The only problem is, what the hell should I bring? I don't know nothing about food and these folks are going to want to be impressed with whatever I bring. The pressure, as they say, is on.

New Fork You, and announcing In the Kitchen with Slashfood

I've been a busy, cranky man of late. I've been staying up way past my bedtime for the last few days cranking out video podcast after video podcast.

Last week we posted not one new episode of Fork You, but two (meatloaf, and the one that proves I have better taste than Marisa). Today comes two more new episodes of foodie goodness, but only one of them is a Fork You.

First, the Fork You crew paid a visit to The Spring Gardens a few months back, and we have finally had time in our production schedule to get the episode up. This one really showcases our great new camera. Doesn't that footage just make you long for a garden of your own? Thanks to Stephan for taking time out of his schedule to talk to us:

The other video Marisa and I posted today was over at Slashfood, Weblogs' food blog. Some of you might know that I'm the head honcho over at TUAW, a Weblogs Inc blog that covers all things Apple, and Marisa is a Slashfoodie. It would seem that Brad Hill, the big Man at WIN (that's what the cool kids call Weblogs, Inc) had caught wind of Fork You (mostly from my Tweeting I would imagine) and he liked what he saw. Thus began a very long discussion about Marisa and I making Fork You for Slashfood with a couple of key differences:

We were hesitant for a few reasons, but it mostly boiled down to the fact that we like having complete creative control over Fork You. We can say or do whatever the hell we want, and we don't have to ask anyone (as long as we both agree, that is). Brad suggested we do 2 episodes of Slashfood in the Kitchen (that's the name of the podcast) and we figured what the heck. And so I give you the first episode of Slashfood in the Kitchen:

At the moment it is only available via AOL's video sharing site, Uncut. I hope to get the QuickTime file up soon so that it will be an actual podcast.

Oh, and the picture up above has nothing to do with either of these episodes, but I think it is a good picture of me.

Two Fork Yous in one week

I haven't been blogging here on Blankbaby much in the last few weeks for a few reasons:

That's right, for some reason Marisa and I decided that October and November would be Forkful months! A new episode of Fork You every week, and so far we've delivered. In fact, this week we posted two episodes:

I've also agrede to do another video project (that pays some dough), so that's taking some of my time. It is like I have 3 jobs now (though I am pretty happy about all of them):

It is a wonder I have time for reading, eating, and going to the gym! Oh, and I am working on launching another blog shortly because I still have an hour of unstructured time every other Thursday.

How have you been, dear Blankbaby readers?

I have a few posts brewing in this little old noggin of mine, but until then check out my new shirt. I bought it at Macy's, which I am no longer too fat to shop at (Macy's had no issue with me when I was heavier, but they also didn't have any Big and Tall clothes, so I couldn't buy anything that fit me. No longer!).

I'm so hot it is ridiculous, right?

Is anyone as shocked as I am that I am still single?

Looky here, another episode of Fork You, and this time we're talking coffee. Peet's was kind enough to send Erica Hess to talk with us about the ins and outs of making a good cup of coffee.

This episode also marks the debut of our fancy new camera, and our second season! If you do watch this episode, bigger is better... so instead of watching it here watch it over here (or click this link for the QuickTime version).

It is always a nice feeling when you know that someone you care about is very happy. You know the feeling, don't you? A sort of warm, squiggly feeling deep inside of you that let's you know the world isn't half bad. It is not unusual for someone to feel this way at a wedding of a dear friend, and I am happy to report that is just how I felt this past Friday. However, this feeling was amplified because two good friends were getting married... to each other and I can take at some of the credit for it. Thad and Angie (if those are their REAL names) got hitched this past weekend after a 2 year courtship (or there abouts) and I introduced them to one another! Such is the mighty power of the Blankbaby, I tells you! Remember, ladies, I'm still single and I am very fashionable as evidenced by the above picture. Anyone who has encountered Thad and Angie (or Thadgelica as some have called them) over the past year or so could tell that these two wacky kids were meant to be together. I'm just happy they let me participate in their happy day (I was an usher, and I must say that I ush with the best of 'em). The ceremony itself was very nice, though the priest's homily was a little creepy. He managed to bring up pedophilia and having a threesome with Christ in the same homily. It was most impressive. I also nearly managed to make Marisa laugh out loud during the ceremony, which would have been hilarious (to me at least). Other highlights of the evening include: A good time was had by all, and here are my pictures, Roz's pictures, and Marisa's pictures to prove it.

10 Zen Monkeys asks Is The Net Good For Writers?

Is The Net Good For Writers? is a pretty dumb question, if you ask me.

The question is built upon the thought that since online publishing has made it easy for anyone to get their writing out there it must be bad for people who consider themselves 'writers.' Just because it is easy to get your writing online doesn't make the act of writing any easier, trust me I should know. It seems that every reader of TUAW thinks that blogging is super easy ('That Scott McNulty does it, so how hard can it be?'). Judging from the 500 or so applications I have read from people wanting to blog for TUAW (that's roughly 1500 sample posts) I can tell you that most people can't write worth a damn. Most of the applications are well meaning, but horribly written and if you take that and a nickel you won't be able to buy a pitcher of warm spit (though why you would want a pitcher of warm spit is a matter best left between you and your clergyman).

Where does the time go?

That's what I want to know!

More tomorrow, but first I must sleep. I do have many things to share with you though:

Have you ever been so full of ideas that you wanted to crack your skull open and pour them all out? That's how I feel at the moment, but sadly sleepiness trumps all.

Thad being a jackass at his own wedding

This thing still on? Hello?

Ok, so I haven't been blogging much as of late on this old blog (ok, it has been a few months!) and there is a reason for that... I haven't been going to the gym as much. Now, I know what you're going to say, "Scott, have you given up?"

Never! I think it is crucial, though, not to let this weight lose thing get in the way of me living my life, and life has been pretty good and very busy.

Luckily, things have quieted down and I am back at the gym and you'll never guess that I have been doing there. That's right, I've been running on the treadmill for 26 minutes (doing about 2.3 miles, not too shabby).

Yes, I've gained a couple of pounds but I am still on the road to fitness.

Fork You 13: Bart's Bag of Mystery

Another Fork You is online for your enjoyment! This one took a while for me to finally get finished, but we're hoping to post an episode a week for the next two months (which might kill me, though it was my idea so I shouldn't complain).

Oh, and we're working on some other things to keep the ball rolling.