Lookie here, a new episode of the world's best cooking podcast that I am involved with: Fork You! The good folk at P'unk Ave invited the Fork You crew to their space to film an episode, and we couldn't say no!

If you would like Fork You to film an episode at your home, workplace, place of worship, or Villa please let us know!

Should I get these shoes?

I am not much of a fashion plate (at the moment I am wearing a polo shirt I bought at the Apple Store in Cupertino, so that tells you how much I think about fashion) but I do like looking nice. I do, in fact, want to eventually meet a woman who isn't repulsed by me and sadly first impressions are largely based on what one looks like. I seem to recall reading somewhere that women notice men's shoes (I would never notice what shoes a woman is wearing) so I guess it might behoove me to wear something other than my very comfortable New Balance 992's from time to time. Anyway, this is all a long way of asking: what do you all think of these shoes.

I don't know why, but I find Reed's MealToday hilarious.

Tim spent a lot of time on this 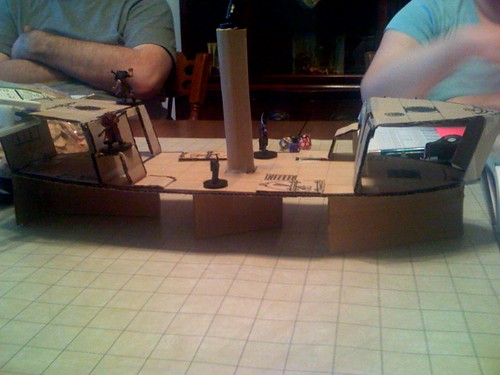 That's the ship our D&D characters are serving on. Once we saw it we all sighed a breathe of relief, Tim wouldn't have spent all that time building a model of the ship if he was going to sink it during the first session.

Thad being a jackass in his kitchen

Yes, I have an iPhone

Thanks to the powers that be I have an iPhone (so I can test it with our systems at work, of course). The evidence of my iPhone happiness can be seen in the increase of random pictures posted here. I realize that not everyone wants to see every frickin' picture I take with my iPhone (though the camera in the iPhone puts the one in the Q to shame), so I have decided to post most of my iPhone pictures to Flickr. You can find them here, if you're interested.

Worry not, though, I'll still be posting the best to Blankbaby (and Thad Being a Jackass will look better than ever!).

The future of Fork You

Where will you be on September 1st?

September 1st, 2007 is shaping up to be quite a day. Colin, of Viddlerfame, asked Marisa and myself, of Fork You fame, if we would be up for doing some contest judging for Viddler. Since we are like BFF's with Viddler (like, totally) we said sure! Soon we learned that the man, the myth, the guy who is shorter than I thought he was: Gary Vaynerchuck of Wine Library TV would be judging with use. He's been on TV, and profiled in lots of magazines (even John Gruber watches Wine Library TV, something tells me Grubs doesn't watch Fork You), so we were pretty excited.

We then found out that not only would we be judging the MealToday Contest (best video wins an iPhone or a camera) but we would be doing it live at Indy Hall's grand opening on September 1st. If you aren't familiar with Indy Hall it is Philly's hot new coworking space and it is super cool (or so I have heard, I haven't actually had a chance to check it out myself, but watch Alex's tour).

I know what you're thinking, "How can I get in on all this fun?!" Head on over to Upcoming.org and RSVP (by the way, Upcoming.org sent me a tshirt many moons ago. When I got it, it didn't fit because it was a XXL and I was a XXXL kind guy. I now wear that shirt to the gym... yeah, I'm all kinds of awesome).

One final note, Colin asked Marisa and I if we would be up to filming some video for a promo for the event. Being the media whores that we are, we said sure! After the Philly Blogger meetup we set the camera up, sat on the stoop outside my building, and did whatever it is we do. Above you'll see the 1:40 minute highlight reel that I put together for Colin. Originally it was just meant for Colin's eye, but it would seem I can't hide anything from Alex and before I knew it the video was on Twitter. Luckily Marisa was OK with it, and so it is available for everyone to watch! We did many variations of this same promo over 30 minutes with no prep, because that's the kind of podcasters we are. It has been viewed 1113 times at the time of this writing. What is wrong with people?

Anyway, hope to see you on September 1st!

Agh, my champagne order has arrived

Soda as it was meant to be

Much like Amazon the iTunes Store suggests things to you that it thinks you might like given your purchasing history. I must say that sometimes I think Amazon knows me better than I know myself, but the iTunes suggestions are sometimes a little wacky.

Take, for instance, the fact that it suggested that I might like Robert Shaw's Sea Shanties (iTunes link), featuring the Men of the Robert Shaw Chorale. Not my usual listening material.

Do you want to know what is even stranger? I took a listen to a few of the tracks, and I bought the damn thing (I'm listening to it now). I am sure my neighbors appreciate hearing sea shanties at 12:30am. I aim to please!

I am a little late in posting this to Blankbaby, but better late than never! We have posted the latest episode of Fork You which you can either watch here, or download it over at Fork You.

This wasn't the episode we set out to make that day, but it came together nicely (if I do say so myself!).

First iPhone pic of me

This is from my iPhone

Suicide isn't a good way to deal with recalls, if you ask me:

The head of a Chinese company that was behind the recall earlier this month of more than a million Mattel toys committed suicide over the weekend, China’s state-controlled media reported today.

Zhang Shuhong, a Hong Kong businessman and owner of the Lee Der Industrial Company, a company that made toys for Mattel for 15 years, hanged himself in a company warehouse in Foshan, in southern China, the Southern Metropolis Daily said today.

Today I was at the store getting some salad dressing for dinner (well, to put on the salad that I was having for dinner) and I saw these Sour Cream & Onion Quake sitting on the shelf. I enjoy rice cakes, and I enjoy sour cream and onion so I thought it was prudent to give them a shot.

10 cakes is 70 calories, which isn't bad I suppose, but the important thing is that they are super tasty. I might be in love with the Quaker Oats dude (or is that Barbara Bush?).

Winter equivalent of the Hawaiian shirt

Sure, it is still a little hot here in Philly, but soon enough it will be long sleeve weather around these parts and you know what that means! I need to buy some shirts.

You see, when you lose 100 pounds, the clothes you wore last winter aren't going to fit this winter (note to self, buy pants as well). That lead me to thinking about what kind of shirts I should buy. Astute readers of Blankbaby may notice that I enjoy wearing Hawaiian shirts from time to time, but they are not appropriate winter wear. So, dear readers, what is the winter equivalent of the Hawaiian shirt? I suppose I should at least attempt to look kind of stylish (ladies, I am still single).

Let me know in the comments! You know you want to!