I was going to post as much more introspective piece about the nature of Fork You, and why I enjoy doing it so much but then I noticed two things.

One, Fork You is featured on the Democracy Player‘s ‘Popular’ food podcast page: 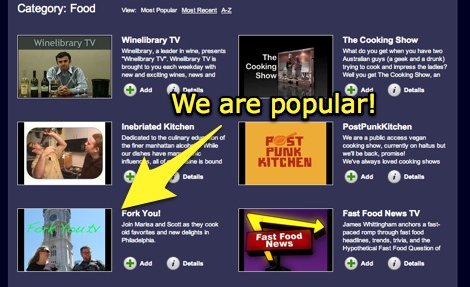 Very cool (though there aren’t that many cooking podcasts in the directory… still it is cool).

At the same time, the good folks at Blip.tv are featuring ‘An Eggsellent Question‘ on their homepage under the ‘Don’t Miss’ section (this is the second time Fork You has graced the front page of Blip.tv. In November our gravy episode was featured). I’m hoping that Fork You gets featured on their banner soon (that’d be totally boss!).

This is a good time to highlight two web companies without which there would be no Fork You! The first is Blip.tv. They host our MP4 files for free (how they make money, I have no idea). Their service is great, and I have even emailed with some folks who work there, which is always a good sign. If you’re looking for a place to host your video files for RSS enclosures, Blip.tv is the place for you. They are also doing some interesting stuff with advertising, which I have to start looking into (hey, we at Blankbaby Media aren’t opposed to making a little money).

The other is Viddler.com. We use Viddler’s awesome Flash player to embed Fork You episodes into the Fork You blog. Viddler’s unique tagging feature really shines as chapter markers, which let you jump to exactly the part of the episode where I dance like a jackass (that is what it is all about, right?). Plus, it is run by a fellow Lehigh grad, so you know it has got to be good (and something about having our Fork You videos served up from Lehigh‘s campus makes me happy). Oh, and Colin is pretty cool too. 😉

The other thing that caught my attention today is that Frank enjoyed the aforementioned egg episode (he even LOL’ed in meatspace. That’s totally cool, dude). That was one thing that Marisa and I worried about the most. We thought that what we were doing was fun, and we thought the show was fun but who doesn’t think they are fun to watch? We were afraid that others would watch it and just not find it worth their time. Our ever growing audience seems to point out that we were completely incorrect. I think we’re both OK with that.

Hurrah for Fork You!

3 responses to “Fork You is catching on like gangbusters!”