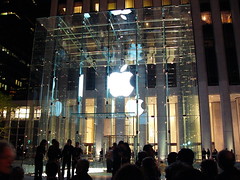 The new Apple Store in NYC is calling to me. I feel the pull of the shiny glass cube. 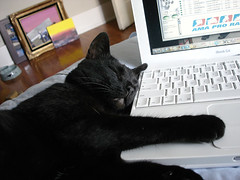 look who loves my ibook
Originally uploaded by Jannygirl.

This Flickr pool is the best thing ever. It combines two things I like (Macs and kitties) and puts them on the Internet (which I have a certain fondness for as well).

This could be of use later

Paul Stamatiou on how to: Setup Gmail for Hosted Domains.

Elijah J. Brubaker is drawing and commenting on 50 superheroes. Here are his thoughts on Cyclops:

The author stated that even if there was one number out there that had no interesting properties then by virtue of being the only uninteresting number that number would become interesting... a paradox. That's cyclops. The single most uninteresting character in the Marvel comics universe and probably the history of comics.

I'm sure he meant it in the olde tyme way.

I own a MacBook

Yes, I bought one. Now, since my mom reads this blog (Hi, Mom!) I feel I must justify this purchase. You see, my mother thinks I spend like a drunken sailor (the much maligned sailor actually doesn't deserve this reputation as a wastrel. Besotted sailors are actually quite thrifty, often haggling to an uncomfortable degree. If you enjoy writing crap like that, see this post).

How can I possibly justify this purchase? There are two main reasons:

Therefore, I didn't buy just one computer, nay! I bought two, two, two laptops in one.

Plus, they are freakin' cool. I will be selling my faithful Powerbook Ambrose though, since I have no need for two laptops.

Another domain added to the Blankbaby Media Empire

That's right, I have yet another idea for a crazy website, but this time I think I am going to ask a few other people to help me out.

If you like to write wacky/absurd things let me know! I need YOU!

Now if you'll excuse me, I must tend to my platypus.

And I show up in some of her pictures.

I suppose not, since it isn't that hard to get a picture of a large man in a small store. It is more amazing that I am not in all of her pictures.

Tabloid footprints in your hair

You would think that if you invited several Philadelphia bloggers to accompany you to see They Might Be Giants (who are my favorite band, bar none) that someone would write about it.

You would be wrong.

Some might point out that the concert was on Friday and I am only now writing about it myself. Hey, I was busy going to the Apple Store, and then making that darned podcast (which has been viewed over 2,500 times on YouTube alone).

Enough moaning, onto the night at hand.

The plan was for everyone to meet at the Latest Dish before the concert to 'get our grub on' at 7pm. I was on track for being on time when Julie called and offered me a ride, which was very nice. Since this would save me the trouble of getting the trolley and then taking the subway (and give me some time to talk to Julie) I took her up on her offer.

That made me late.

Julie and I arrived at the Latest Dish at 7:30 to find that everyone had found each other and were seated together. We sat down and joined the lively conversation. Food (though it took awhile, and Dave's crabcakes never did appear), drinks (water for me!), and fun were had by all. Then the waitress damn near kicked us out by shoving the check at us. We all though that rather rude, until Julie admitted to telling the waitress that we were in a hurry. It all made sense.

So off to the TLA we went to see the Dual Quasars of Rock. I have no photos to accompany this entry because I was unclear of the TLA's camera policy and I thought it best to play it safe. Marisa, however, had tried calling ahead to find out if she could bring her camera with her. She couldn't get ahold of anyone, so assumed that since there was nothing posted on the TLA website that she was good to go.

I think you can all see where this is going.

We all entered the TLA (the men got patted down and the ladies had their bags searched) without a hitch, until it was Marisa's turn. Naturally she was last, and there is a not re-admittance policy. Keep that in mind.

The woman at the door looked into Marisa's bag and told her that they didn't allow 'professional cameras' into the venue. Now, Marisa's camera is nice (and it is black) but it isn't a professional camera. Try as we might to explain this to the ticket lady she wouldn't hear of it. It was either get rid of the camera (but where do you put it?) or don't come in.

We raised enough of a stink that the ticket woman called over her manager to have the final say. He took one quick glance at the camera and said, 'That's fine. She can go in.'

Crisis averted. I was worried for a little while that I was going to be have to be a good friend and miss the concert (SOLIDARITY!). Luckily, no such dramatic actions were called for.

Now that our entire party had entered the TLA it was time to discuss why this dude would be the opener for the opener. No one seemed that into him, but then again he was playing the ukulele on stage which takes some moxy.

Last Car was next up, and I liked them. They sang a few songs about Mr. T and then sang a very lovely song about a firefly. I bought their demo, which I was happy to find out included everything they sang on stage.

After the Last Car it was time for TMBG! It always takes at least 30 minutes to setup the stage for them, so we stood there waiting as more and more people filled up the venue.

Finally, their they were rocking us like a hurricane. If you would like the complete set list check out this entry on This Might Be a Wiki. They sang a good number of older songs I had never heard them sing in concert and some brand spanking new songs (as Flansburg said, 'We're here promoting our new album that isn't out yet by playing songs you don't know!'). They played for a good long while and had two encores (during which they played the TLA venue song which I enjoy).

Overall I would give the outing a 9.5 out of 10. I can't wait for the next TMBG concert.

How about a picture of Josh Leo's new kitten (and a video too)?

How about a bunch of puppies slowly advancing on cat?

Comedian Yakov Smirnoff, who earned a master's degree in positive psychology, was among the approximately 6,000 graduates.

Freedom in a box!

In my country Jody Foster commences you!

This Saturday I woke up at an ungodly hour to wait in line for the grand opening of the Apple Store in Suburban Square. Andrea, being a fairly recent convert to the church of the Mac, accompanied me to the store (and eagle eyed views will notice her in the above video.

Now, if you want a higher quality version of this video head on over to my post on TUAW.

I had a ton of fun, and it didn't hurt that a few people recognized me (I am an beloved Internet personality, after all).

The people have spoken, and the beard stays! Hurrah!

Flower in my hair

On line at the Apple Store

Thad is a jackass

Condemnation is a good song.

You should listen to it.

That's how many Feedburner subscribers read TUAW over the last 24 hours. Jason has all the stats.

I sometimes forget that lots of people read TUAW.

That's right, folks, Scotty is in a good mood.  Why?  Because I said so!

There isn't any real reason that I am so chipper, though I am looking forward to my weekend plans AND I am looking pretty good today in a new, stylin' shirt (if I do say so myself.  Of course if I didn't say so no one would).

Therefore, I encourage you to be happy today!  Hug someone you love, or even just like. DO IT!

Swedish Fish are truly the candy of the gods

I am sitting here eating some Swedish Fish, and I must say these tiny bastards are quite tasty. For many moons I eschewed the delights of the Swedish Fish because I thought they were akin to Sour Patch Kids, but I didn't much care for.

I have seen the error of my ways, and now I enjoy a handful of Swedish Fish with the best of them. As I was sitting here shoving fish after fish into my fat face (oh, and take it from me, get the genuine swedish fish, they say 'Swedish' on them) I spied the ingredients list and I thought I would read them. Let me list for you the first four ingredients of these magical fish:

Another reason I enjoy eating the Swedish Fish is that it makes me feel like a Nordic god (perhaps Loki) who has thrust his mighty hand into a rushing Swedish river and pulled out some delicious fish which I then dump into my gaping, god like maw. That might just be me though.

I think I am going to check out the  Apple Store - Suburban Square this Saturday. Who's with me?!

When did I get so much classical music?