What is more fun than a bunny singing about sex?? That's right: nothing (well, perhaps a few things)!

I have this thing for E-Ink. Two of my greatest loves, reading and technology, seem to be destined to be ships that pass in the night. Ebooks suck because starting at a screen for hours on end isn't the best thing for the eyes.

Enter E-Ink, which allows for a much more 'paper' like experience while retaining the ablitiy for many books to be displayed on one device. It looks like Sony will be releasing a US version of their Librie ebook reader next month and I am going to buy it. I don't even to know what the specs will be, but they matter not because I have been jonesing for an E-Ink device for a long, long time.

Always bring something with you when attending parties.

I never remember to do this, and I worry that the host of the party thinks me a right bastard.

Further proof that I shouldn't be allowed to live on my own.

Damn it, and I like to joke that I'm tone deaf. Thanks to the National Institute on Deafness and Other Communication Disorders' Distorted Tunes Test I can no longer say that:

You correctly identified 25 tunes (out of 26) on the Distorted Tunes Test. Congratulations! You have a fine sense of pitch.

The test takes a little over 5 minutes and requires speakers (duh).

Fired for speaking the truth about Rachael Ray

A blogger wrote a post called Rachael Ray Is Not God, which chronicles Rachael's visit to the store he then worked for. 2 weeks later he was fired, but the post is still very entertaining.

P.S. I can't stand Rachael Ray with her abbreviations, her 30 minute meals, and her cheating her way through 40 dollars a day.

I'm going with Aslan too

I plan to write a Blankbaby 2005 wrapup soon, but I came across this meme at Yoko's and I thought I would give it a whirl.

You write down the first line of the first post of every month and BAM! You've got your year in review.

January: Let me be, most likely, one of the last people to wish you and yours a very Happy New Years (or as my brother said on my answering machine 'Merry New Years!').

February: Amazon seems to think a great gift for 'him' on Valentines Day is:

March: Well, I just completed my 150th post over at TUAW, which is my paid blogging gig.

April: This decision wasn't easy for me.

May: People have clamored for them, demanded them, waged war for them!

July: Many people claim that Dave Winer was the first blogger, however, that honor actually belongs to none other than Asa Packer, founder of my Alma Mater, Lehigh University.

August: With my Star Trek calendar in place I finally feel comfortable.

September: My power went out at 10pm.

October: Podcast numero 4 is up and ready for your listening.

November: I don't expect that many of you know who Keith Parkinson was, unless of course, you're as big a geek as I am.

December: I will never think of the Mulberry Bush in the same way again.

Blankbaby Media at a cross roads

Ok, folks, I am getting ready to migrate Blankbaby Media, the home of both Blankbaby Radio and Blankbaby TV, to its very own domain. Exciting, yes?

However, I have come to realize that I can only really devote my energy to one or the other.

If I go whole hog into Blankbaby Radio I will get myself some mics, a mixer, and be good to go (and perhaps I will follow through with that co-hosting idea of mine).

If I go head first into Blankbaby TV I am going to need to find a partner. One who has a video camera, likes video editing, and wants to help some wacko (that's me!) do wacky things across Philadelphia. I think a Blankbaby TV focusing on all things Philly would be a hoot (and popular as well) but it'll be hard to find someone who has a similiar sense of humor as I do and the equipment to make this happen. I'm the talent you see, I would be the host (who isn't afraid to look like an idiot), the writer (though help with writing is welcome), and a co-producer. I would need a director, camera man, and editor (and perhaps co-writer if they wanted to).

So, dear Blankbaby readers, which do you think I should focus on? Or should I stick with what I know and write crappy self centered blog posts such as this (actually no matter which option I go with Blankbaby will go on. Nothing can stop Blankbaby!).

Sorry it has been quiet over here (I know you all miss my words of wisdom) but I have been blogging like crazy over at TUAW (something like 35 posts in the last 2 days!).

Here are some stats that give you an idea of how much I have blogged about Apple over the last year (actually it has been just under a year) at TUAW:

Who knew I had that much to say about Apple?

Here's how to tell. 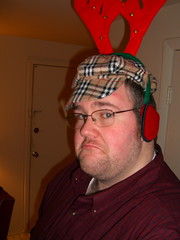 I have found the look for me
Originally uploaded by blankbaby.

Hey, hey all! I am back in Philadelphia (I have been since yesterday) and my Christmas pictures are ready for your viewing pleasure!

Go take a look, and yes I am that sexy in person.

The Christmas cheer has begun

Nun in a gift shop

I'm sure you cannot make her out but she's there.

Merry Christmas to all 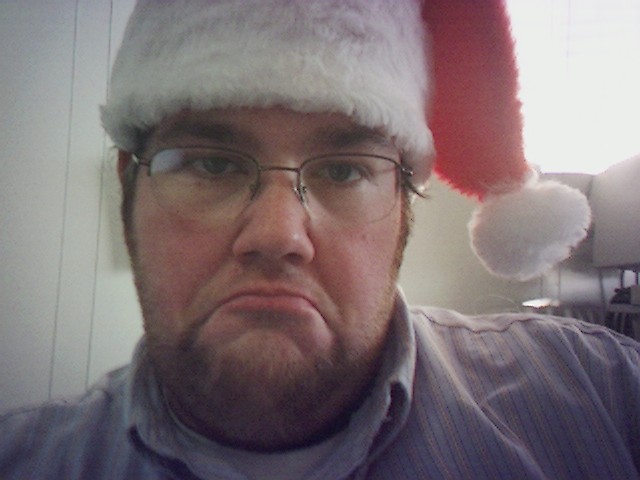 I thought I would post this 'vintage' Scott Christmas pic from last year for you to enjoy. I'm off to Virginia in a little bit and I'm leaving the laptop at home. This will be the first time in 4 years or so that I am going to be traveling without a computer.

Expect low blogging, but I will have my cell phone so a picture or two might find their way to Blankbaby.

Enjoy the holidays, and always remember that your Uncle Scottycake loves you.

I just made my first call with Vonage

I called my brother to confirm our travel plans (we're taking the train to DC to see our mom, but he's starting in NYC and I'm in Philly so we have to meet on the train) and I used my Vonage line. I should have switched years ago.

The Chronic WHAT nicles of Naria video on iTunes

Hey all you wacky cats out there, remember that little SNL video I linked to the other day? Well, you can download it for free from iTunes now.  Pretty sweet, huh?

I posted something a little longer over at TUAW, so check it out if you want.

It is not easy being this good looking all the time.

I love a good grammar joke

Especially when it is told by chickens.

Justin Flax was kind enough to offer his design skills to my business card task, and combined with Patricia Storms' wonderful rendition of me business card magic was made:

This means that I have to whip Blankbaby.com into shape posthaste (at the moment it forwards to Blankbaby Media).

Big props to Justin for doing this for me.  If you are in need of any design work, Justin is your man.

Christmas card and stamps have arrived

The good news is that I have gotten both the cards AND the stamps, so tonight I will be sending out an email asking folks for their 'snail mail,' (ain't I clever?) so I can send a card to them.  Chances are it will arrive after Christmas, but it is the thought that counts.

HowTo: Export your posts from Typepad

Given the recent wackiness with Typepad, I thought it would be a good idea to export all my posts as a backup. I went through all the steps and I thought to myself, 'This isn't hard to do but if you don't even know this exists you're pretty much screwed.'

I have created this short video tutorial on how to export your posts from Typepad to help others do it for themselves. Right click on the link to save it to your desktop (the video is in Quicktime and clocks in around 10 megs for about 4 minutes of video).

Let me know if you found it useful and perhaps I'll do some more of these screencasts.

The Chronic of Narnia Rap

The Chronicles of Narnia Rap is the funniest thing that has been on SNL in a long, long time.  I particularly enjoyed the reference to Aaron Burr, but that's just how I roll.  Even if you don't like Burr, you'll enjoy this little video.

Help me with the next Blankbaby Radio

Hey all, as you know I just got Vonage.  I am keeping my old number, but it takes up to 20 days to get it transfered, so Vonage has given me a 'virtual number' for the time being.  I thought it would be fun if people called that virtual number and left a message for me, as if you're calling a talk radio show.  I will then take the messages and create the next Blankbaby Radio around them.

Sounds like fun, right?  So, call me and leave a question, a comment, or a rant and I'll weave it into a compelling podcast tapestry.

I hope to hear from you soon (and don't worry, my Vonage phone isn't set up yet so you are guaranteed to get voicemail).

Oh, and in the message don't forget to leave your name (or a name).  So a message would go like this, 'Hi, Scott, this is <name>, blah blah.'

This is going to be fun!